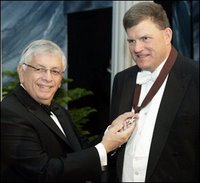 In addition to the hullabaloo over last week's NBA Draft and this week's free agency movements, one of the Nuggets division "rivals", the Seattle Supersonics, are moving to Oklahoma City after 41 years in the Emerald City. The move has surprised no one, as the new Sonics owner (and OKC native) Clay Bennett (pictured with NBA Commissioner David Stern) has wanted the team in OKC ever since he bought it from Seattle native and Starbucks founder, Howard Schultz.

First off, as a Nuggets fan, this may not be a bad thing. Since there's absolutely nothing to do in OKC, this is one less city where the Nuggets players will get themselves into trouble on the road.

But secondly, and more importantly, I feel genuinely bad for Sonics fans. While the Seattle metro area (3 million or so residents) is a little bigger population-wise than Denver's (approx. 2.3 million), our cities and our NBA fans/franchises have been very similar historically. Both cities consistently rate high on all those "best cities to live in" lists, and each franchise came onto the scene 41 years ago (Denver as the Rockets in the ABA and the Sonics in the NBA).

As fans, we both look back fondly at the good old days of the late 1970s when the Nuggets made an immediate splash in the NBA and the Sonics appeared in back-to-back NBA Finals (netting a championship in 1979). In the 1980s, we had high-scoring, consistently entertaining teams that met in the 1988 playoffs when Denver's Alex English, Fat Lever and Jay Vincent bested Seattle's Xavier McDaniel, Tom Chambers and Dale Ellis in an exciting five-game, first round series. And of course, we all remember the mid-1990s when the young, 8th-seeded Nuggets upset the powerhouse, 1st-seeded Sonics. Both teams were stacked with quality young talent, and the Sonics would find their way into the finals in 1996 while the Nuggets imploded under former Sonics coach-turned-Nuggets-GM, Bernie Bickerstaff.

In addition, like being a Nuggets fan in Denver, being a Sonics fan in Seattle relegates you to third-class citizen status (in their case, behind the Seahawks and Mariners). So while the Seahawks and Mariners seemed to have no problem getting new stadiums recently, the Sonics were the odd team out. Luckily for us in Denver, we have an owner who also owns the more popular draw, the Avalanche.

Thirdly, I blame former Sonics owner Schultz for much of this. Schultz is one of the wealthiest men in America, and yet because his basketball team was hemorrhaging money, he decided to sell. Fine. I'm not suggesting anyone has to keep something that's not profitable, but at the very least Schultz should have sold it to another local owner. It's not like he needed the money! Selling the team to Bennett under the auspices that he would use his "best efforts" to keep the team in Seattle was total bullshit (pardon my language) from the start.

Fourthly, I think the team is going to do great in OKC. I used to think that moved teams owned by sleazebag liars like Bennett would be doomed to years of bad karma in their new locations. But Art Modell's Baltimore Ravens (formerly the Cleveland Browns) and alleged husband killer Georgia Frontiere's St. Louis Rams (formerly of Los Angeles) proved me wrong when both franchises won Super Bowls within just a few years of relocating. Moreover, the NBA has been quite successful in markets where they are the only game in town, such as Portland, Sacramento, Salt Lake City, San Antonio and Orlando.

For basketball fans in Seattle - and for the NBA in general - this is a travesty and something I pray never happens to our beloved Nuggets. Even though we gripe about management, coaching, some of the players, etc, at least we have a team that's not going anywhere and an owner committed to keeping it that way. And for that I say: "thank you, Mr. Kroenke."

I hope you all enjoy your holiday weekend!