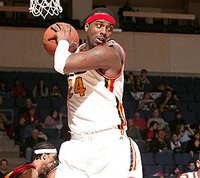 For the first time in eight games, the Denver Nuggets finally beat the Los Angeles Lakers. Of course, it was just the final Las Vegas Summer League game.

As readers here predicted, the Nuggets had a damn good team by Summer League standards, dropping only one out of the five games they played. And in three of those four victories, the Nuggets Summer Squaders handily defeated their opponents.

By our calculations at Denver Stiffs, the "real" Nuggets currently have nine players on their roster: Allen Iverson, Carmelo Anthony, Nene, Kenyon Martin, Steven Hunter, Anthony Carter, Chucky Atkins, Linas Kleiza and J.R. Smith (assumed to be re-signing, especially since he's not getting interest from anyone else). And unless second round draft choice (via trade) Sonny Weems was deemed a total failure in Vegas, count him in as roster spot holder #10. Therefore, including Weems the Nuggets would have five guards, four forwards and one true center (Hunter) going into training camp. Gulp.

Historically, the Nuggets have had about 12 guys going into camp assured of a roster spot, meaning that only one or two Summer Leaguers found their way into camp. But with the Nuggets parting with starting center, former Defensive Player of the Year, former NBA Finals runner-up (on a team he carried, by the way), rebounding and blocked shot specialist, veteran anchor and the only man willing to take a charge, Marcus Camby, to the Clippers for a bag of rocks (can you tell I'm not over this trade yet?) and not re-signing hustling backup forward Eduardo Najera, don't be surprised if two or three of the Summer Squaders - excluding Weems - end up in training camp.

One of those spots should go to power forward Elton Brown (pictured above), and this shouldn't even be debatable. In five Summer League games, Brown averaged 13.4 ppg on 57.8% shooting to go along with 10.0 rpg (5.4 offensive!). The Nuggets have been thin at power forward throughout the Carmelo Anthony era (hence the atrocious trade-and-signing of Kenyon Martin), and Brown finally gives the Nuggets that third forward option they desperately need.

I have no idea who the next training camp invite should go to and frankly, having not been able to watch the games, it's not fair for me to say who's in and who's out other than Brown. But going strictly by the numbers, the first name that jumps out is going to be shooting guard Dahntay Jones who a had a terrific Summer League offensively (21.5 ppg in the games when he got real minutes). All we really know about Dahntay Jones is that he's been a bust as an NBA player thus far, but maybe he has had his humble pie and is refocused.

Having actually played for the Nuggets last season, you'd have to think point guard Taurean Green and shooting guard Bobby Jones would merit some consideration, but based on the numbers alone neither had a particularly good Summer League. In 21 minutes of playing time per game, Green mustered more turnovers (2.0) than assists (1.6). And Bobby Jones, who's always been an erratic shooter (a necessity when you're the Nuggets third string shooting guard apparently), only made 41.4% of his FG attempts.

If the Nuggets have finally soured on Green and/or Bobby Jones, the long shot pick for training camp would be shooting guard Keith Langford, whom many Denver Stiffs readers predicted would be a good Summer League player. When given playing time, Langford averaged a respectable 11.8 ppg on 61.5% shooting. But at 6'4" (and I hear he's more like 6'3"), an undersized shooting guard is the last thing the Nuggets need.

It will be interesting to see who the Nuggets bring into training camp from the Summer Squad and the NBA scrap heap. We should start taking bets now: who will be this year's Reggie Theus?