Share All sharing options for: Meet your new Denver Stiffs...

Over the past few days, Denver Nuggets "management" has brought in a few face freshes to replace the departed Marcus Camby, Eduardo Najera and Yakhouba Diawara (whom the Nuggets allegedly just aren't calling back hoping he'll go away...kind of like the way I used to be treated by my ex-girlfriends). The news guys are Chris Andersen, Dahntay Jones and Renaldo Balkman. Combined, these three players make the same amount of money as the two number one draft picks the Nuggets should have instead - one having been sent to Charlotte for an overprotected future pick, the other never thought to ask for when they decided to unceremoniously dump Camby's contract.

I'm not against the signing of Andersen or Jones, and I actually like the Balkman trade. But I'd have been a hell of a lot happier - and I suspect you would have been, too - with a pair of draft picks that actually filled needs versus three swingmen-type players with no discernible skills and no real upside.

But we can only cry over spilled milk for so long, regardless of how much has been spilled by the current administration this summer. So let's meet our newest Nuggets, two of whom are pretty likable guys. 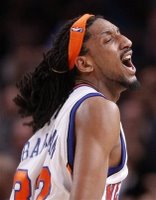 Renaldo Balkman - Forward
As noted in Monday morning's post, Balkman gets major pluses in the hustle and defensive effort categories, which is usually a fancy way of saying you're a stiff at everything else. I watched a lot of Knicks' first halves last season (just for the train wreck factor), but not enough second halves to assess what Balkman is really about. I just remember watching him in the 2007 Summer League and remarking on his energy level being several notches above everyone else. Looking at his numbers, his per 36 minutes stats - about as good of a barometer for future success as MSNBC political polls - aren't too shabby. What I like in particular is that he seems to fill out the box score, regardless of the minutes he's given. The bottom line is, for the price of Taurean Green and Bobby Jones, the Balkman acquisition is a good one. 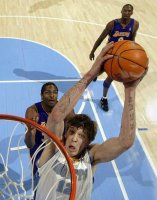 Chris Andersen - Forward
One of this blog's readers wrote in on Monday saying that Andersen is a center. Hardly. Regardless of position Andersen, like Balkman, won't let you down effort-wise. But as much as we all love the Birdman - and we do love the Birdman - he's played in only 37 NBA games over the past four years. So we should temper our enthusiasm a bit until we see some results on the floor while praying that he's not out partying all night with his new teammates. Former drug addicts have told me that just one sip of liquor can lead to trouble, and the current Nuggets roster isn't exactly made up of Prohibition-type guys. But at about a million dollars for one season, the Nuggets had nothing to lose by signing Andersen and I don't see any negatives here at that pay grade.

Dahntay Jones - Guard
Jones is the least exciting acquisition of the three, but everyone gets a second chance (well, in Jones' case it will be his third chance since he didn't pan out in either Memphis or Sacramento). In 14.8 career minutes per game, he's mustered just 4.9 points to go along with a rebound and a half, half of an assist, less than half a steal, virtually no blocks and a .441 shooting percentage. He happens to be a terrific dunker, but so what? Oh, and he's an atrocious defender from what I've heard. In other words, he's Harold Miner* without the absurd "Baby Jordan" moniker tagged on to him. But Jones deserves credit for playing hard on the Nuggets' Summer League team and impressing management and the coaches enough to secure a job for 2008-09. So when he plays his four minutes per game in the spot formerly used for Diawara, we'll root for him.

*Remember when the Nuggets possessed the fifth and 13th picks in the 1992 NBA Draft and brought in Miner for consideration as the fifth pick? The Nuggets ended up drafting my all-time favorite Nugget, LaPhonso Ellis, while Miner's stock plummeted. When the Heat were up at 12, I remember praying that they'd take Bryant Stith so the Nuggets could get Miner...the guy we were going to take at five! But when the Heat went with Miner at 12, the Nuggets picked up Stith who, while never winning any dunk contests, certainly had a better career at two guard than Miner. And this is why you don't want me running your basketball team anymore than you want Mark Warkentien doing it.