Give this man a training camp invite already...

Share All sharing options for: Give this man a training camp invite already... 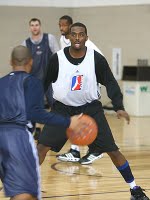 While assessing who might be the backup to Marcus Camby's replacement - presumably Nene - we didn't get a chance to discuss who will fill in at the backup power forward spot when Nene moves to starting center.

If the Nuggets bring back Chris Andersen, he'd certainly be one choice. But with the Nuggets going to "small ball," Andersen will probably play a lot of backup center minutes.

Readers of this blog know that we've been on the Elton Brown bandwagon since before the Vegas Summer League began. And even though I haven't been able to really watch a Nuggets Summer League game (thanks to NBATV and Altitude totally screwing Nuggets fans by not showing any on TV), after reviewing Brown's four game log, I'm convinced...bring this guy into training camp already!

In last night's 105-104 "victory" over the Houston Rockets summer squad, Brown had his best performance thus far: 21 points on 9 of 14 shooting to go along with 12 rebounds (9 offensive!). I know it's Summer League and most of these guys rarely amount to much, but if the Nuggets are truly in cost cutting mode, why wouldn't they bring this guy into camp?

Oh, and Dahntay Jones continues to produce. Well, at least points-wise, anyway. In four games, he's had two assists. That's right: two! If anything, he's been consistent with his career average of a whopping 0.6 assists per game. As well as Jones is playing offensively, I'd still rather go with Brown (if I had to choose between the two).

On a side note, if you happened to miss this SI.com story about George Karl and potential Nuggets Interim Head Coach Hall of Fame inductee Nick Van Exel, it's kind of funny and worth a quick read (way down at the bottom of the page).

Have a great weekend everyone!