Camby's replacement: Who would you rather have?...

Share All sharing options for: Camby's replacement: Who would you rather have?...

Until proven otherwise, I'm standing by my statement that the Marcus Camby "trade" was just a salary dump, and that no larger plan is in the works. But just like getting abruptly dumped by your girlfriend (not that I would know what that's like), there's nothing you can do. Sometimes you have to just forget about it quickly and move on. Regardless of how much we complain, Camby is never coming back, nor is the first round draft choice, the young point guard, or whatever else the Nuggets should have received in the trade.

So let's put the Camby "trade" debacle behind us - at least briefly - and assess the five possible replacements/backup centers already being kicked around in the media and elsewhere.

Nene
Pro: When healthy and lean, he has the potential to be an All-Star power forward. He's remarkably quick for his size, has the wingspan of a seven-footer (and then some), terrific hands and isn't afraid to muscle his way past opposing power forwards. In many ways, he reminds me of a taller Calvin Natt. But most unfortunately, he seems to have inherited Natt's knack for getting injured, as well (let's hope he doesn't inherit Natt's desire to run a mortuary, too).

Con: With his injury track record over the past 4 seasons, he makes Camby look like A.C. (which stands for "All Christian," for the uninformed) Green. Also, Nene is generously listed at 6'11" and 250 lbs when he's more like 6'9" and 275 lbs, and has a tendency to enjoy his Brazilian off-seasons a bit too much. I mean, did any of you see Nene in last summer's Tournament of the Americas? He looked like Grimace from McDonalds.

Con: Hunter doesn't possess a killer instinct and easily gets pushed around in the paint. He's one of those guys you look at and say: "Wow, he looks like a basketball player!" but he just isn't. Even when he got 23 minutes a game as a 76er before coming to Denver, he averaged just 6.4 ppg and 4.8 rpg. He's essentially Kwame Brown without the anvil around his neck of being picked first in the draft.

Francisco Elson
Pro: As a recent former Nugget, Elson should be familiar with Denver's "system." He's also stated that he'd like to come back to Denver, and I always give players extra bonus points for actually wanting to be here. Also - and for no justifiable reason - I liked Elson in Denver. I thought he was an able backup center to Camby and had a good attitude. But maybe I'm just a sucker for the Dutch.

Con: Elson won a championship ring with the Spurs in 2007, but was frequently benched in favor of the tougher Fabricio Oberto. Why? Elson stays away from the basket too much. For a guy who's seven feet tall, his career FG% is .478 and he averages less than one block per game. Ugh.

Chris Andersen
Pro: Where do I start? The Birdman is a rare holdover from the Jeff Bzdelik era (as is Nene) and has long been one of the all-time fan favorites in Denver. I think this is because we see a lot of ourselves in the Birdman: if we woke up one day with the same basketball "skills" we have now, but were suddenly 6'10" and could jump out of the building, we'd probably play like Birdman, too. Andersen also hustles whenever he's on the court and his wingspan and athleticism will be needed on the defensive end in Camby's absence. Another plus, in his career Andersen has averaged 1.3 blocks per game in just 16.4 minutes of playing time.

Con: The obvious con is that Andersen hasn't been in the league long since serving over a two year suspension for violating the NBA's drug policy. It was a good sign when the New Orleans Hornets welcomed him back as soon as he was reinstated, but they're a franchise built around Christian fundamentals (even though their owner is a total hypocrite) and frequently attend church as a team (I'm not advocating for this, by the way, just explaining what they do). So I cringe a little bit when I think about Andersen partying with Melo, A.I., K-Mart and J.R. Smith. 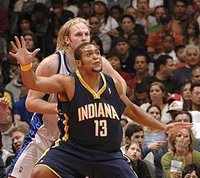 David Harrison
Pro: Harrison is also a legit seven-footer and has Colorado ties, having played for CU in college. He's admitted to being childish in the NBA so far, but claims he's put that behind him and is willing to take a minimum salary to play in Denver.

Con: As articulated in our NBA Draft Preview, most centers drafted after the 10th pick or so are stiffs, and Harrison has been one in the NBA thus far, on and off the court. Harrison has also never gotten his weight down. I guess this happens when you smoke a lot of pot and get the munchies (an admitted cheap shot and a bad joke to boot).

In conclusion, I think its safe to assume that Nene will start at center if he physically can do so. Because even though Hunter is already under contract, as well, he's a stiff and will remain the team's number three backup center.

The real question is: who will be the primary backup center behind Nene? Elson, Andersen or Harrison? And who would you prefer to have?

Given that the Nuggets just lost their best hustle guy in Eduardo Najera and their only shot blocker in Camby, I believe bringing back the Birdman is a no-brainer here. Especially if the Nuggets want to play small, loose and fast, Andersen will be a great complement to the players already in place on offense, while altering plenty of opponents' shots and picking up a few blocks on defense. If nothing else, Andersen ups the Nuggets "entertainment value," so along with watching Rocky you won't feel totally robbed when you fork out 10% more for your season tickets.

And just for us Nuggets fans, maybe the Birdman will bring back his half-court, off-the-glass dunk from the Denver All-Star Weekend?