Share All sharing options for: What Doc Rivers should've learned from Rodney Rogers... 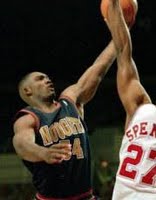 It's tough for me to watch the NBA Finals because I have so many friends that are either annoying bandwagon Lakers "fans" or annoying bandwagon Celtics "fans", and therefore I want both teams to lose every game. (I've already chronicled why I hate Lakers "fans" and maybe I should do a Boston version soon, too). But I have tickets for Game 4 - albeit nosebleed seats - and as an NBA fan I want a seven-game series, so I had to root for the Lakers to win last night.

Even though I was rooting for the Lakers, I jumped off my couch when Celtics' coach Doc Rivers didn't call for his team to foul the Lakers with his Celts down just six points with 38 seconds left, yelling: "FOUL THEM, DOC!! FOUL THEM!!!!" (nevermind that Doc has FOUR terrific three-point shooters on his team). I find myself doing this a lot when I watch NBA games and coaches don't foul because they think their cause is lost down the stretch. You see, as a Nuggets fan, I KNOW that you can score nine points in nine seconds. Just watch this:

That's right, it was none other than Denver Nuggets rookie Rodney Rogers who - in 1993-94 (inarguably the most exciting season in Nuggets history since 1987-88) - wiped out an eight-point Utah Jazz lead at McNichols Arena in just nine seconds by sinking three three-pointers off three Robert Pack assists and two tremendous Pack steals. Of course, being the Nuggets, our players spent too much time celebrating to notice John Stockton calmly dribble down the court and pass the ball to Jeff Malone for the game-winning jump shot with 12 seconds remaining.

But ever since witnessing Rogers' amazing moment in NBA history and others like it (such as Reggie Miller's eight points in 8.9 seconds against the Knicks in the 1995 playoffs), I've never, ever understood why coaches give up like Doc did last night. Unless the opposing team is ahead by a minimum of 10 points with 10-20 seconds left in a game, you foul, foul, foul! As Jeff Van Gundy said during last night's ABC broadcast in response to Doc's curious decision not to foul: "It's the NBA Finals! Anything can happen!!"

It will be interesting to see how the Boston media and Celtics bloggers react to Doc's George Karl imitation from last night.

On a quick side note, while we're reflecting on Rodney Rogers and Robert Pack, be sure to check out this video on the top-10 dunks from 1994-95.