The Nuggets Offseason: Kenyon Martin (and the All-NBA Most Untradeable Team)...

Share All sharing options for: The Nuggets Offseason: Kenyon Martin (and the All-NBA Most Untradeable Team)... 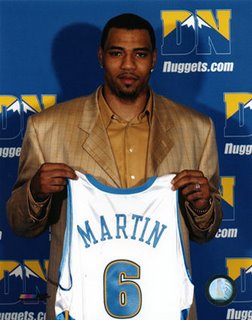 So far, DenverStiffs.com has chronicled the offseason situations of J.R. Smith, Eduardo Najera, Carmelo Anthony, Marcus Camby and Allen Iverson. Next up is Kenyon Martin, but frankly, there's not much to discuss or debate in regards to Martin ... because he's completely untradeable. In fact, Martin is the most untradeable player in the NBA. Therefore, I'll quickly recap Martin's case and get right to his teammates on the All-NBA Most Untradeable Team.

The Situation: Thanks to former Nuggets' GM Kiki Vandeweghe (with pressure from owner Stanley Kroenke to make a free agent splash in the summer of 2004), the Nuggets are on the hook to pay Martin $14 million next season, $15.4 million in 2009-10 and $16.5 million in 2010-11. The final season is technically a player's option, but I have a sneaky suspicion that Martin will re-up.

The Good: When healthy (which is rare) and motivated (perhaps even more rare), K-Mart brings a level of toughness and energy sorely lacking on the Nuggets. He still dunks with ferocity and can put the clamps down on an opposing player who is his height or shorter.

The Bad: What made the K-Mart trade and signing so ridiculously stupid was that Martin was never that good to begin with. In his BEST NBA season (while with the Nets), he averaged 16.7 ppg, 9.5 rpg, shot .488 from the field and missed 17 games. Nevermind that he was completely exposed in the 2003 NBA Finals when forced to go up against a non-Eastern Conference power forward. In six games against the Spurs, Martin never once shot over 45%, and in the crucial fifth and sixth games, he made five shots against 31 attempts (including his epic 3-23 performance in Game 6 which amazingly never gets talked about alongside John Starks' 2-18 performance in Game 7 of the 1994 Finals).

And to top it all off, Martin was known as being a locker room cancer in New Jersey, which re-surfaced as a Nugget during his now infamous tirade against head coach George Karl and teammates during the team's embarrassing 2006 playoff loss to the LA Clippers. 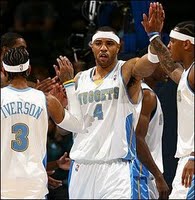 The Verdict: Throw in multiple knee surgeries since joining the Nuggets and K-Mart's refusal to develop a mid-range jumper (even though every decent power forward in history including Tim Duncan, Kevin Garnett, Karl Malone, Charles Barkley, Kevin McHale and even Horace Grant had one), and you have the most overpaid / untradeable player in the NBA. And with Isiah Thomas no longer running an NBA franchise, K-Mart is going nowhere. There were moments during 2007-08 when it appeared as though Martin had had his humble pie and was just appreciative to be back on the court. But after eight seasons in the NBA, you are what you are. And in K-Mart's case, you're a 14.5 ppg, 7.2 rpg, undersized, injury-prone power forward with no offensive game to speak of other than an occasional thunderous dunk.

So rather than waste our time fantasizing about where Martin could end up, I thought I'd present the 2008 All-NBA Most Untradeable Team. To qualify for the team, a player has to have three seasons left on his contract, excluding team options (therefore, classic bad contracts like Stephon Marbury's or Bobby Simmons' are ineligible as an expiring contract, or soon-to-be-expiring contract, can be used as trade bait).

-Kenyon Martin, Denver. For all the reasons noted above.

-Eddy Curry, New York. For a guy due to make $9, $10.5 and $11.3 million over the next three seasons, Curry's stats aren't the problem. But he's perenially overweight, inarguably the worst non-European center on the defensive end and with the exception of one season in Chicago, every team he's been on has won 33 games or less.

-Erick Dampier, Dallas. Damp parlayed a double-figure rebounding performance in each of his last six games as a Warrior in 2004 into a contract that will pay him $9.5, $10 and (yikes) $13 million over the next three seasons in Dallas. In case you're curious, he's only gone six straight games with double-figure rebounds once since then, and that was during his first season as a Maverick. As a Maverick, he's never averaged more than 9.2 ppg and 8.5 rpg.

-Marco Jaric, Minnesota. Every dumb signing begins with a dumb GM, and there are few GMs dumber than Minnesota's Kevin McHale. After trading All-Star point guard Sam Cassell for Jaric in 2005, McHale signed Jaric to a contract that will pay him $6.5, $7 and $7.6 million over the next three years. Not only has Jaric never played in a postseason game, but he's a career 7.8 ppg, 3.9 apg and .408 shooter.