Share All sharing options for: The Nuggets Offseason: Allen Iverson... 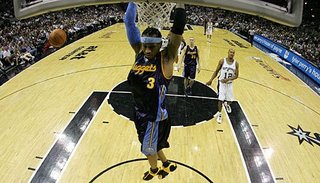 With all of the attention paid to the New York media-concocted Carmelo Anthony-to-the-Nets-trade and the zillion nostalgia pieces being written about the upcoming Lakers/Celtics NBA Finals matchup, the fate of Nuggets' superstar Allen Iverson has gotten very little attention (except for the Rocky Mountain News' Chris Tomasson's detailed account of Iverson's contract situation on Friday).

The Situation: Iverson has one year remaining on his contract that will pay him almost $22 million in 2008-09, but he has the right to opt-out of the deal before June 20th and become an unrestricted free agent. According to Tomasson, the Nuggets' brass has already been discussing a contract renewal with Iverson's representatives for a three-year deal. To pull this off, Iverson would have to formally opt-out of his current contract, and then re-sign with the Nuggets for three years at a lower annual rate. But at 33 years old (five days from now), how much will Iverson be able to command from Denver, a team already well over the NBA's luxury tax limit?

The Good: As everyone reading this blog knows, Iverson is an absolute warrior on the court. At 32 years old in 2007-08, he played in all 82 games and led the NBA in minutes per game while regularly taking a pounding on the court. Overcoming his advanced age for a grossly undersized shooting guard and a broken bone in his non-shooting hand, Iverson finished third in scoring, ninth in assists (ahead of Andre Miller) and fourth in steals. In addition, Iverson had his second best career performances in turnovers-per-game and field goal percentage, meaning he's reigned in his game quite a bit for the Nuggets and is playing smarter and more under control.
Furthermore, known for having problems with coaches and the law during his tenure in Philadelphia, Iverson has been a model citizen in Denver and by all accounts is liked by teammates and wants to retire as a Nugget. If ever one needed proof of "the new Iverson," just look at the way he handled coach George Karl's (inexcusable) benching of him in Game 3 of the playoffs against the Lakers. Even though he admitted being frustrated by the decision, Iverson refused to throw his coach under the bus and even went as far as to say he'll do whatever the coach asks of him. 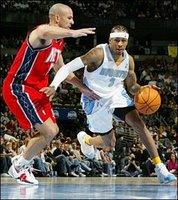 The Bad: At 5'11" (tops) and a scoring machine (Iverson is third all time in scoring average), Iverson is a tough player to build around. His most successful Philadelphia team - the 2000-01 squad that he carried to the NBA Finals - featured decent sized guards who primarily played defense (Aaron McKie and Eric Snow) to go along with a consortium of defense-first role players (Dikembe Mutombo, Tyrone Hill and George Lynch). In other words, the complete opposite of the Nuggets.
One problem I've noticed with Iverson - and this is just my view from the cheap seats - is that he's not a transformative, vocal leader a la Kobe Bryant, Kevin Garnett, Chris Paul or Baron Davis. I don't know if he's trying to defer to Carmelo Anthony, or just fit in since he's new to Denver, or if it's just not in his nature anymore, but he doesn't seem to impose his will on his teammates (and frankly, opponents) like he did in Philadelphia. As a 76er, Iverson would just take over games and carry his team if need be. In Denver, he seems to go about his job with tremendous effort and yet do so quietly at the same time, allowing his teammates to be self-accountable. This was especially apparent during the playoff sweep against the Lakers in which Iverson appeared to just go through the motions while his Nuggets teammates, especially Anthony, imploded around him.
And, of course, there's the elephant in the room: the Anthony/Iverson situation. I think they genuinely like each other, but it's inarguable that Iverson's arrival (precipitated by Anthony foolishly punching Mardy Collins during the Madison Square Garden Melee in 2006) has stunted Anthony's growth. Anthony has taken a lot of heat - justifiably - on this blog and elsewhere in Nuggets Nation - but we quickly forget how good he was (and how in-shape he was) before the brawl and how well he plays within a system that suits him (a la Team USA). And regardless of what many of this blog's readers have said, Anthony will remain just as trade-able at 25 as he is now at 24 should he disappoint us further in the 2008-09 postseason (assuming the Nuggets get there).
Unfortunately for Iverson and us Nuggets' fans, this current crop of Nuggets players is desperate for veteran leadership and creative coaching to make the Anthony/Iverson duo as lethal as possible...and they aren't getting much of either right now. 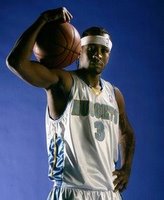 The Verdict: Traded to Denver for Andre Miller essentially, the Nuggets have gone from an under performing yet talented team with an over-dribbling point guard to an under performing yet talented team with an over-dribbling shooting guard who might just be the third best shooting guard of all time (behind only Michael Jordan, Kobe Bryant and Jerry West perhaps).
The Nuggets are in a bit of a tricky spot with Iverson. As the News' Tomasson points out in his summary of the contract situation, even if Iverson takes a pay cut - say, by $7 million or so - and asks for $15 million per season for the next three seasons, that still puts the Nuggets well over the luxury tax threshold limiting their future flexibility. By not re-upping Iverson now, the Nuggets could see how the season plays out and use the superstar guard as trade bait since he puts asses in the seats to go along with what would be a $22 million expiring contract. The problem with the latter route is that the Nuggets would risk insulting Iverson (not that paying someone $22 million to play basketball should be an insult, but this is the NBA) and, unlike Davis and others in the league, Iverson doesn't need to be in a contract year as incentive to appear in every single game...and play hard while doing so.
The bottom line for me is this: I don't want the Nuggets to lose Iverson but I don't want them to waste his last two good years either by overpaying him (meaning the team couldn't surround him with quality role players like he had in Philadelphia). By bringing head coach George Karl back, the Nuggets are already wasting one more season of Iverson's services. But if the Nuggets can get Iverson to sign for something in the $14 million per season range, I say do it.
However, if Iverson and his reps decide to hardball the Nuggets and demand something like $18 million per season, I say let him enter the 2008-09 season as an unrestricted-free-agent-to-be and see what happens. If the season turns out to be a disappointment, the Nuggets could trade Iverson by the All-Star break for a few role players, fire Karl at season's end, and build the team around the younger players like Anthony (24), J.R. Smith (23) and Nene (25). It's too bad Iverson is almost 33 years old, because I'd take a younger Iverson over any of those aforementioned guys any day of the week.