The Nuggets next trading partner...Detroit?...

Share All sharing options for: The Nuggets next trading partner...Detroit?... 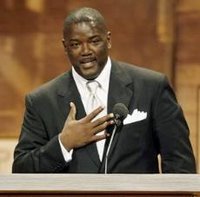 In our offseason recap of the Marcus Camby situation, I suggested that the Detroit Pistons might be interested in the former Defensive Player of the Year should they flame out in the Eastern Conference Finals again. Well, the Pistons did in fact flame out and GM Joe Dumars has fired their coach and said personnel changes are coming this summer. Could the Nuggets be an able trading partner?

On Friday, Travis Heath at HoopsWorld threw out an Allen Iverson/Marcus Camby-for-Chauncey Billups/Rasheed Wallace trade possibility. And today, the Denver Post's Mark Kiszla is reporting that the Pistons might be interested in Carmelo Anthony (which is kind of funny considering it was Tashaun Prince's presence on the roster that prompted Dumars to pass on Melo in favor of Darko Milicic in the 2003 draft).

Meanwhile, George Karl has resurfaced from hip surgery (you sure you don't want to take a whole year off to recover, George?) to laugh off the Melo-to-the-Nets rumors while maintaining that no Nuggets player is untradeable.

I like Detroit as a possible trading partner, but not for Melo. A Billups-Iverson swap could be interesting, but only on chemistry grounds. Both players are essentially the same age (Billups turns 32 this fall, Iverson turned 33 yesterday) and are hybrid points/assist guys with Billups being closer to a true point guard, obviously. Billups is less expensive (owed $36 million over the next three seasons) than Iverson (will make approximately $45 million over the next three seasons), and is a better three-point and free-throw shooter. But Iverson is a much better scorer and can impose his will on a game, something Billups doesn't do.

But again, on chemistry grounds, you have to at least think about it if you're the Nuggets. With Iverson deferring to Melo, he's not the A.I. that we traded for. Whereas Billups is accustomed to being "one of the guys" vs. "the guy", and as a three-point threat he could expand the floor for slashers like Melo, Kenyon Martin and J.R. Smith. And of course Billups is a Denver native.

I doubt Detroit would part with Billups for A.I. unless they could ship out the troublesome Rasheed Wallace, as well. Wallace would most certainly come at the price of Camby, and unfortunately a Wallace addition would make the Nuggets locker room even more of a disaster than it already is. But it's worth thinking about and I'm sure Denver Stiffs readers will come up with other Detroit trade scenarios for us.