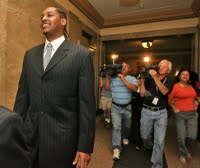 I really want to keep this blog focused on the draft this week and we've had enough fun at Carmelo Anthony's expense regarding his DUI fiasco. So if you'd like to read about Melo's day in court regarding his DUI charge, I recommend reading the Rocky Mountain News' detailed coverage.

But one thing that must be highlighted here was Nuggets coach George Karl's presence in court to support Anthony. I laid into Karl (as usual) the other day for not coming out publicly on behalf of Melo with the trade rumors swirling around, and still believe that this will add to their pre-existing friction going into the 2008-09 season. But Karl showed a lot of class by being there for Melo today, and he deserves major props for that.

See, we can be "fair and balanced" at DenverStiffs.com, too!