Ex-Nuggets vs. Current Nuggets: Who's Better?...

Share All sharing options for: Ex-Nuggets vs. Current Nuggets: Who's Better?...

In light of ex-Nugget James Posey's solid NBA Finals performance, Denver Stiffs reader Kieran M. from Denver wrote me this morning with a great idea for a column: compare ex-Nuggets who are still active NBA players with the current Nuggets roster, and then compare the cost difference. After surveying every Nuggets roster since 1991-92 for players still active, I put together what I think would be the best possible actively playing ex-Nuggets team going into the 2008-09 season. I've broken down the comparison by position and will give my assessment at the end. I'm anxious to hear what you think...

CENTER - DIKEMBE MUTOMBO (free agent) VS. MARCUS CAMBY ($8 million)
Even though Denver Stiffs is advocating trading Camby this summer and Mutombo had a remarkable season (considering his advanced age) filling in for an injured Yao Ming in Houston, I think we'd all rather have Camby anchoring our defense in the middle. EDGE: Camby. Other possible active ex-Nugget centers: Mark Blount, Raef LaFrentz and Francisco Elson. 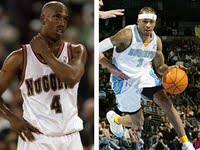 HYBRID GUARD - CHAUNCEY BILLUPS ($11 million) VS. ALLEN IVERSON ($22 million)
Since neither Billups or Iverson are pure point guards or pure shooting guards, I'll call them "hybrid guards." This is actually a tough call. Iverson is undoubtedly a better player statistically, but Billups is a proven winner having been to six-straight conference finals, two NBA Finals and being a former NBA Finals MVP who has more game-tying and/or game-winning shots on his resume than Iverson. In all likelihood, Billups probably benefits from being a better fit on a very talented team than Iverson does on his very talented team, but Billups costs $11 million less. EDGE: Even. Other possible active ex-Nugget hybrid guards: Earl Watson, Bobby Jackson, Earl Boykins and Greg Buckner. 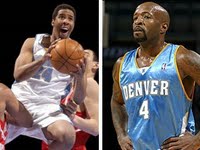 POINT GUARD - ANDRE MILLER ($10 million) VS. ANTHONY CARTER (free agent)
Another no-brainer, but this time in favor of the ex-Nugget, Miller. Carter took a lot of heat last season from the readers of this blog, but it wasn't his fault that head coach George Karl forced a backup point guard into the starting role. Miller was a perpetual over-dribbler during his stay in Denver, but after seeing his success in Philadelphia and watching A.I. routinely over-dribble himself, I blame Karl for this (no surprise). EDGE: Miller. Other possible active ex-Nugget point guards: Steve Blake, Jeff McInnis and Carlos Arroyo.

BENCH - EX-NUGGETS ($46.3 million) VS. CURRENT NUGGETS (approx. $25-30 million)
If I had to select seven top actively playing ex-Nuggets for the bench, I'd go with Steve Blake, Earl Watson and Bobby Jackson at guard, Reggie Evans and Joe Smith at forward, and Mark Blount and Raef LaFrentz at center. The current Nuggets bench situation is a bit up in the air. We still don't know for sure if J.R. Smith is coming back (but we're assuming so), and we're even more unsure about Eduardo Najera. Likely to be back in Denver will be Nene, Linas Kleiza, Chucky Atkins, Stephen Hunter and whomever the Nuggets draft at month's end. But even assuming the Nuggets re-sign Smith and Najera, their current bench cost will remain significantly less than their ex-players' bench cost. EDGE: Current Nuggets.

So the total cost of the actively playing ex-Nuggets comes to about $80 million (LaFrentz's $12.7 million contract sure is a doozy!) whereas the current Nuggets roster is projected to be about $85 million. Given the negligible cost difference and the current Nuggets clearly winning out at small forward, center and off the bench, the overall edge goes to the current Nuggets.

But it sure would be nice to have those high character / tough defenders like McDyess, Billups, Mutombo and Posey back!