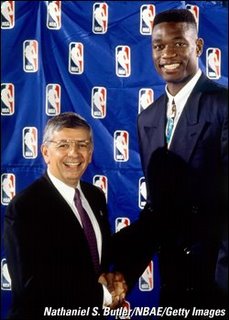 NBATV has been running classic drafts all day/night, and I was in the middle of watching the 1996 NBA Draft with John Calipari justifying why his Nets just drafted Kerry Kittles over Kobe Bryant when the GF popped her head into my home office. "What are you watching?" she asked with a look of suspicion on her face. "Um, the NBA Draft from 1996," I replied. She then just nodded in a trance-like state and vacated the room before the Mavericks drafted Samaki Walker.

Anyway, the 2008 version of the NBA Draft is on Thursday (5pm MST, ESPN) and I can't wait. Like the NBA Draft Lottery and All-Star Weekend, I'm a total sucker for the draft. In fact, I'm missing an annual college alumni event on Thursday just to watch it live. Even in this era of DVRs, there are certain sporting events you still have to watch live, like big playoff games, the NBA Finals and of course, the NBA Draft. It's just not the same unless you have your friends calling with comments like: "Who the f--k is Efthimios Rentzias and why the f--k hasn't Bernie been fired yet?!!" within seconds of making a pick.

And unlike recent years (2006 and 2007), the Nuggets actually have a pick this time, the 20th (past picks were traded to the Nets and 76ers for Kenyon Martin and Allen Iverson, respectively). In addition, this will be the debut first round draft selection by the Nuggets current management regime of Mark Warkentien, Bret Bearup and Rex Chapman, so their eye for new talent will be put to the test.

I'm breaking up our Draft Preview into two parts. This first part will focus on past NBA Drafts to give some historical context to what the Nuggets could expect to see available and how to play their cards right. In the next post (coming before Thursday's draft), we'll look at who the Nuggets are or should be considering for their selection. While I'd love to do an entire post on the Nuggets draft history, those who follow this blog know that I've thoroughly dissected all the hits and misses in my breakdowns of the Bickerstaff, Bristow, Issel, Vandeweghe and Warkentien / Bearup / Chapman Administrations, and we don't want to go through that painful walk down memory lane again.

Going into Thursday, I first looked at the past 20 NBA Drafts (the modern era, if you will) and who was drafted in the 18-24th pick range. There are way more misses than hits, but the hits include talented guys with notorious off court problems like Rod Strickland, Jayson Williams (before he was killing limosine drivers and shooting dogs at point-blank range), Latrell Sprewell, Zach Randolph, and current Nugget J.R. Smith, international steals like Zydrunas Ilgauskas, Andrei Kirilenko, Nenad Krstic, Sasha Pavlovic and some players that have been integral on NBA Championship teams like Brian Shaw, "Eddie" "star" Rick Fox, Sam Cassell, Michael Finley, Derek Fisher, former Nugget James Posey, Tayshaun Prince and Rajon Rondo.

And, of course, some of the biggest stiffs in Nuggets history were drafted - although not necessarily by Denver - in the first round after the 18th pick, such as Jerome Lane, Anthony Cook, Kevin Brooks, Mark Randall, Ervin "Don't Call Me Magic" Johnson, George Zidek, Efthimios Rentzias, Priest Lauderdale, Mamadou N'Diaye, Donnell Harvey and Julius Hodge. Moreover, it seems like the players the Nuggets drafted in this range who actually panned out ended up doing so when they were no longer Nuggets, like Bobby Jackson (drafted for Denver by Seattle), Posey, Jameer Nelson and Jarrett Jack.

But as noted above, an astute GM can find good value with the 20th pick if he knows what he's doing and abides by the following four rules...

Rule #1: Stay away from centers in the back of the draft.

By my accounting, in 20 years only four decent centers have been drafted in the first round from the 20th pick onward: Vlade Divac in 1989, Elden Campbell in 1990, the Big Z in 1996 and Brendan Haywood in 2001. In fact, an entire landfill could be filled up with the corpses of bust centers like Cook, Duane Causwell, another "Eddie" cast member in Dwayne "My Name is Ivan!" Schintzius, Alaa Abdelnaby, Stanley Roberts, Elmore Spencer, Geert Hammink, Zidek, Loren Meyer, Lauderdale, Travis Knight, Leon Smith, Jake Tsakalidis, N'Diaye, Pavel Podkolzin and David Harrison (and I'm sure I missed a few).

Rule #2: Don't get seduced by the "best athlete available" argument.

Most teams drafting late in the first round - like the Nuggets in 2005 - made the playoffs, so they go into the draft willing to gamble on "raw talent" with "big upside" (anyone who has watched the draft should be familiar with Jay Bilas' buzz words by now). But history tells us this is a flawed strategy, and the Nuggets themselves have paid the price for drafting this way (see Brooks, Kevin and Hodge, Julius). Consider the case of Hodge specifically. Had the Nuggets drafted for what they really needed - a backup "big man" for the oft-injured Kenyon Martin, Nene and Marcus Camby - Jason Maxiell or David Lee might be Nuggets right now.

Rule #3: When in doubt, draft a power forward who played at least three years in college or somewhere overseas.

As Denver Stiffs reader Derek S. in Denver pointed out to me in an email, there's been a slew of good-to-great power forwards over the years who have been neglected in the earlier part of the draft. I did some research going back to 1988 and came up with this list of NBA-ready (due to them staying in college or playing professionally overseas) power forwards who were selected late in the first round (or even in the second round) during that 20 year span: Clifford Robinson (36th pick overall), Jayson Williams (21st), Antonio Davis (45th), P.J. Brown (29th), Kenny Thomas (22nd), Krstic (24th), Carlos Boozer (34th), Luis Scola (55th), Anderson Varejo (30th), Maxiell (26th), Lee (30th), Ronny Turiaf (37th), Paul Milsap (47th), Leon Powe (49th), Carl Landry (31st) and even "Big Baby" Glen Davis (35th). 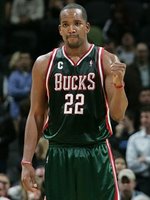 Rule #4: Put a premium on character and work ethic.

At the end of the day, a terrific college player with a tireless work ethic and solid character will figure out a way to be a productive NBA player, even if he's deemed "undersized" for his position by the draft pundits. Most of the power forwards listed above would fit this description, as do other late round or second round steals. Notable names on this list include Shaw, Fox, the late Bobby Phills, Cassell, Bryon Russell, Finley, Eric Snow, Fisher, Jackson, Posey, Eddie House, Michael Redd, Gerald Wallace, Gilbert Arenas, Earl Watson, Prince, John Salmons, Josh Howard, Jason Kapono, Luke Walton, Steve Blake, Kyle Korver, Nelson, current Nugget Linas Kleiza and Jordan Farmar.

Drafting players in professional sports is hardly an exact science, and it's easy for armchair GMs such as myself to look back in hindsight at what should have been. But if you look at the teams that have been most successful in the latter part of the NBA Draft recently, such as the Lakers, Pistons, Jazz and Spurs, they generally abide by the four rules stated above. So when we look at who might be our newest Nugget going into Thursday, we'll apply the four rules above and make a few recommendations. After all, the last thing we need is another stiff on our roster!