Share All sharing options for: Denver/Detroit: A full team swap?... 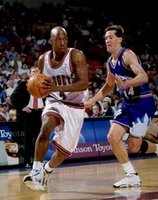 When we discussed the possibility of a Denver/Detroit trade the other day, I was under the assumption it would be Chauncey Billups/Rasheed Wallace for Allen Iverson/Marcus Camby. But when news broke that the Pistons are "interested" in Carmelo Anthony, many in the basketball punditry world suggested that the ideal move would be to trade Anthony/Camby for Billups/Wallace.

The Denver Post's Woody Paige takes the proposition of a Detroit trade even further today, and essentially suggests the two teams just relocate to each other's cities.

I have two thoughts. 1) I'm still very intrigued by the prospect of bringing Billups back to Denver, but not at the expense of Anthony. Even if that's the only way to jettison Kenyon Martin's god awful contract. 2) Just because a "source" claims that Detroit is "interested" in Anthony, this means absolutely nothing. I'm sure every team is "interested" in Anthony...well, except for teams that actually win like the Lakers, Celtics, Spurs, Jazz, Hornets...