The Denver Stiffs Week in Review...

Share All sharing options for: The Denver Stiffs Week in Review... 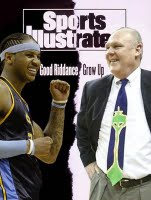 It was a busy week in Nuggets Nation. In case you missed anything, here's a recap...

On Monday, Dino Costa scored an interview with Jeff Bzdelik and got the Nuggets former coach to offer some brutally honest insight into what Melo was like as an immature rookie. In addition, Melo was officially introduced as a member of the 2008 Olympic Basketball Team at a Chicago press conference.

On Tuesday, in looking forward to the Nuggets "drafting" 20th in Thursday's NBA Draft, we served up a detailed analysis of what the 20th pick means historically and dished out the Four Rules for a successful late first round draft. Later that day, Melo appeared in a Denver court and pleaded guilty to a lesser charge of driving with alcohol. What was most notable about this was Karl's appearance in court to support Melo, a very classy and necessary move that might go towards repairing their somewhat fractured relationship.

On Wednesday, we posted the second part of our draft preview and after thoroughly analyzing the players likely to be available at 20th, we applied the Four Rules for a successful draft and recommended the Nuggets draft D.J. White, with consideration given to Marreese Speights, Darrell Arthur and Ryan Anderson. Just a few hours later, the Nuggets traded their pick to Charlotte for a future, overly-protected first round pick, causing outrage among Nuggets fans everywhere for passing on such a deep draft.

On Thursday, the Nuggets sat out the NBA Draft for the second year in a row. Cowards.

On Friday, it was revealed that the Nuggets acquired a new player in the draft, after all, by trading for second-round selection Sonny Weems of Arkansas. This prompted the best comment of the week from Denver Stiffs reader Eric:

"He's got a great name to pair with Carmelo Anthony on the growing list of 'African-Americans with Italian mobster sounding names'."

The word on Weems is that he's an "athletic" 6'6" that might participate in the dunk contest someday. It sounds like we just got a poor man's Harold Miner. Ugh.

On Saturday, Melo joined his compatriots on Team USA in Las Vegas and gave some candid comments on the end of the Nuggets 2007-08 season. Let's just hope he doesn't spray 15 bottles of champagne on the crowd at Tryst.

And today, the Denver Post's Mark Kiszla continues to put the heat on Karl by placing the responsibility for Melo having a successful 2008-09 season on the head coach. Couldn't agree more.