The Carmelo Anthony vs. George Karl Era is upon us...

Share All sharing options for: The Carmelo Anthony vs. George Karl Era is upon us... 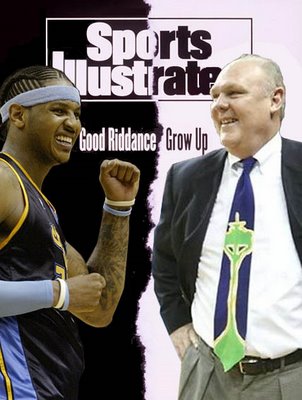 All Denver sports fans remember this famous Sports Illustrated cover from 1993 featuring John Elway vs. Dan Reeves and the era that led up to it: in spite of multiple Super Bowl appearances, the star player butted heads with the old-school coach, the coach wanted say over personnel decisions and tried to oust the player, but ultimately management/ownership sided with the player and fired the coach.
This experience should have prepared us for the Carmelo Anthony vs. George Karl Era, which technically kicked off when Melo yelled "just don't sit there!" at Karl for all within earshot to hear during the Nuggets Game 3 blowout loss at home to the Lakers, and Melo's postgame assertion that the coaches - and the players - quit during the game. But now, with ESPN.com reporting that Karl is ready to trade Anthony, their alleged "feud" will be the topic of conversation until one of them is gone. And like the Elway vs. Reeves situation, according to several reports Denver Nuggets management is not only keeping Carmelo Anthony, they are assuring his agent Calvin Andrews on Monday that the future of the team will be built around Anthony.
Wow.

First of all, add this to the list of examples where Karl and the Nuggets management troika of Mark Warkentien, Bret Bearup and Rex Chapman have differed on player personnel decisions (like the non-Ron Artest trade). And so much for Karl's prior claims that the Nuggets brass supports him and they're all on the same page. If Karl does indeed want Anthony out of Denver as ESPN.com reported (and given that Karl has not once emphatically said that he wants Melo back next season, there's no reason to believe otherwise), this is a slap in the face by management.

Secondly, it's the right decision. As I said when setting the record straight on the Melo trade debate, if the Nuggets trade Melo just to pacify Karl, it would be the biggest travesty for a franchise littered with historical travesties. Such a stupid decision would rival the Warriors trade of Chris Webber because head coach Don Nelson didn't want to deal with him. This doesn't mean Melo is untradeable per se, it just means you don't trade him on Karl's behalf. Only three or four coaches in the entire NBA have earned the right to decide what players should come and go, and Karl's 3-16 playoff record as the Nuggets' headmaster puts him far, far away from that short list.
Thirdly, this sets up the biggest soap opera in the NBA going into the 2008-09 season. I thought Karl could have salvaged the situation by being the bigger man (figuratively, of course) and standing up for Anthony this offseason as Melo has had to endure the aftermath of a terrible postseason, the DUI debacle and the never ending trade rumors. Instead, Karl has given us classic, unsupportive Karl quotes such as: "We’re going to keep all windows of opportunity and windows of advancement and betterment…open."
Therefore, don't be surprised if Karl mails in another season as he continues to dare management to fire him for keeping players on the roster that he's either a) not capable of coaching or b) has no desire to coach.

Hey, at least Dan Reeves knew how to coach defense!