A.I. can take off his coat and put up his feet. He's staying awhile...

Share All sharing options for: A.I. can take off his coat and put up his feet. He's staying awhile... 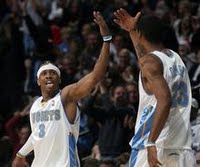 Over the weekend, the Rocky Mountain News' Chris Tomasson reported that Allen Iverson will not be opting out of his $22 million contract for the 2008-09 season and will therefore remain a Nugget for at least one more year (unless the Nuggets move him before the trade deadline, of course). That's the good news for us Nuggets fans. The bad news for Iverson is that, according to Tomasson, the Nuggets never offered him a multiyear deal. So in addition to the pending Carmelo Anthony vs. George Karl "Battle Royale" that we'll be witnessing next season, we'll have the "will A.I. stay in Denver?" talk running all season, too. Good times.

Meanwhile, according to my real estate industry "sources", A.I. is building a new house in Denver. Let's hope for A.I.'s sake that he doesn't pull a Wilt Chamberlain with the construction, or he might find it hard to sell if he eventually leaves Denver.