5 Lessons the Nuggets should learn from this NBA Finals...

Share All sharing options for: 5 Lessons the Nuggets should learn from this NBA Finals...

I know the Nuggets are painfully far removed from ever appearing in an NBA Finals. I know we have an incompetent, arrogant coach who refuses to get involved in the games and make adjustments. And I know we have a cast of talented-yet-selfish players who don't put the good of the team over their individual achievements.

But throw those assumptions aside for a moment and bear with me as I explain what the Nuggets should have learned from Boston's decisive NBA Finals victory. 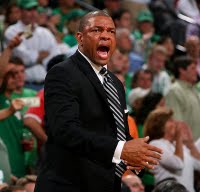 As brother Steven pointed out while we were watching last night's telecast, the key moment of the whole game was Doc Rivers' technical foul at the 9:57 mark of the second quarter. Rivers was reacting to (what was rightly) a no-call when Eddie House was trying to get by Kobe Bryant, but he sensed that the crowd, and his team, needed a little boost from the bench. In the wake of the Celtics' blowout victory over the once-favored Lakers, people forget that the Celtics were only up 26-23 at that moment. And what transpired after Doc's technical? The Celtics outscored the Lakers 32-12 to finish out the half and never looked back.

Guess who finished second-to-last in the league with just one coaching technical in 2007-08? That's right, the Nuggets' George Karl. Karl needs to take a cue from Rivers (who got a few techs in the Finals if I'm not mistaken), and even Gene Hackman if he has to, and realize that working the refs matters. Even if your gripe is bogus as Rivers' was last night, it inspires your players and your crowd, and can swing a game in your favor. 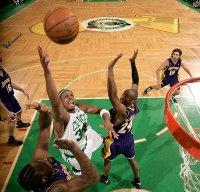 There have been a lot of Carmelo Anthony/Paul Pierce comparisons throughout the playoffs (to which Pierce replied: "I've never got a DUI"). The gist of the argument being that Pierce was similar in his early NBA days to what Melo is now - a supremely talented small forward with a suspect attitude and questionable work ethic who settled for too many outside shots while nevertheless carrying his team into the playoffs but not much else. Like Pierce, Melo is an oversized, powerful small forward who can't be stopped when he takes the ball to the basket. Pierce averaged almost 9 free throw attempts per game in the Finals, up 3 from his regular season average. Compare that to Kobe Bryant (a similar sized player, but not as strong certainly) who averaged just 7 such attempts per game, down 2 from his regular season average.

I know it sounds obvious and cliche, but when your primary scorer drives the ball to the basket it changes the entire dynamic of the game. In 2007-08, the Nuggets were 15-7 (a .681 winning percentage) when Melo had at least 10 free throw attempts. Had Melo done this all season, it's conceivable that the Nuggets would've won 56 games. 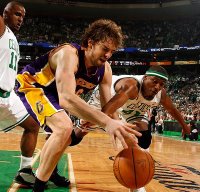 Lesson #3: The Lakers are soft and the West isn't as good as we think.

After watching the Lakers roll over like a bunch of European soccer floppers against the Celtics, I'm even more incensed that the Nuggets rolled over against them in Round 1. Yes, the Lakers were a far superior team to Denver, but lest we forget that they won only seven more regular season games than the Nuggets in 2007-08, and that's with the Nuggets mailing in half their games! As noted in the Denver Stiffs preview of the Nuggets/Lakers series, the Lakers had no interior defense and the Nuggets should have exploited this on every possession (as the Celtics did). To be fair, J.R. Smith and Linas Kleiza did exploit this, but everyone else - and that means you, Melo - forgot to do so.

In hindsight, it's completely absurd that George Karl and his Nuggets players were downright afraid of these Lakers. During his season-ending press conference, Karl acted like the Lakers were the alien attackers in the first 45 minutes the new War of the Worlds movie (which is completely unwatchable, but you get my point) and therefore the Nuggets couldn't possibly compete with them.

Moreover, the Western Conference just isn't as good as we all thought. After all, the Celtics only lost five regular season games to Western teams in 2007-08 (including one to the Nuggets!). There are just a lot of Western teams that are very competitive with each other. The Lakers, Hornets and Jazz will remain the cream of the crop, but the Spurs will be a year older and slower, the Suns and Mavericks will continue to pay for the stupid Shaquille O'Neal and Jason Kidd trades, and the Rockets won't put together another run like we saw last season. The Warriors will probably be the same and the Trailblazers will need to be reckoned with, but they aren't winning championships anytime soon. 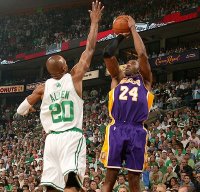 Another cliched, obvious statement, but until the Nuggets embrace a defensive mindset, they will remain a novelty team like the 2006-07 Golden State Warriors, the 2004 through 2007 Phoenix Suns and the Nuggets of 80's lore. Even I'm guilty of saying that the Nuggets should just run a Golden State-style system (with the assumption that the Nuggets are more talented) and win every game 125-115. But this just doesn't work. If the Celtics proved anything in this Finals, it's that even if you get off to an atrocious offensive start, you can win any game with a great defense.

Remember, Doc Rivers was hardly known for being a preeminent defensive coach (or player for that matter), but he put his ego aside and let assistant coach Tom Thibodeau reinvent the team's defense. With assistant coaches Doug Moe and Mike Dunlap vacating the Nuggets bench this summer, Karl and the Nuggets brass should be scouring the coaching ranks for the next Thibodeau.

Lesson #5: You can have more than one leader.

It's hard to imagine now, but back in October the basketball punditry world was asking questions about who among Boston's "Big Three" of Paul Pierce, Kevin Garnett and Ray Allen would be the true leader of the team. Instead, Allen immediately deferred to Pierce and Garnett while leading by example by keeping himself in impeccable condition and preventing his young teammates from drinking alcohol during the season. KG became the "soul" of the team by revamping their entire defensive identity with his tireless work ethic and unbridled energy. And Pierce was the leader on offense by setting an aggressive, take-it-to-the-basket tone when necessary throughout the regular and post-season.

So perhaps the Nuggets should stop worrying about who the leader of the team should be - is it Melo? A.I.? Even Camby perhaps? - and instead each player should do what he does best and try to bring out that trait in his teammates. I see Carmelo Anthony taking on the Pierce role, Marcus Camby the KG role defensively (sans the vocal energy, which Camby certainly doesn't have and never will) and Allen Iverson the Allen role. (Of course, rather than discourage teammates from drinking, rumor has it that A.I. hosts bottle service at clubs and invites all his teammates to join in...yeeesh).


So there you have it. All the Nuggets have to do is get a few more technicals out of George Karl, hire a top-notch defensive wiz at assistant coach, coax Carmelo Anthony into being a more aggressive offensive player rather than settle for jump shots, get Melo, A.I. and Camby to accept broader roles as the leaders of the team and the 2009 NBA Championship will be ours.

And to quote KG: "ANYTHING IS POSSSSSIIIIBLLLLE!!!!"

Have I drank enough of the Nuggets Kool-Aid for you yet?