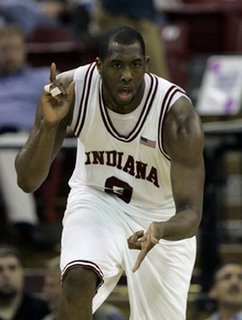 In Part 1 of our Denver Stiffs NBA Draft Preview, we looked back over 20 years of NBA Drafts at the type of players available around the 20th pick (where the Nuggets will be drafting this Thursday, 5pm MST on ESPN). In Part 2 here, we will review the players likely to be available when the Nuggets pick comes up.

Before getting started, I must issue the following caveat: I don't watch a lot of college basketball. Between watching 82 Nuggets games in their entirety and casually watching at least another 82 NBA games every year (plus playoffs), I've just never had time to give college basketball the attention it deserves. I typically watch some regular season college games featuring surefire NBA players, and when I'm in Denver I catch Big-12 games (so I saw a good deal of Michael Beasley last year), and when in L.A. I catch PAC-10 games (and got to watch a fair amount of O.J. Mayo and Kevin Love, too). And of course I'm an NCAA tournament junkie, too. But watching a few regular season college basketball games plus the tournament does not an expert make, and I would never attempt to portray myself as such.

But while I may not be an expert on the players available, I've seen enough NBA Drafts to know the Four Rules for finding good value with the 20th pick, as stated in Part 1:

1) Stay away from centers in the back of the draft.
2) Don't get seduced by the "best athlete available" argument.
3) When in doubt, draft a power forward who played at least three years in college.
4) Put a premium on work ethic and character.

So as we analyze who the Nuggets might draft on Thursday, we'll apply the four rules and make a final recommendation.

First things first, let's list who the Nuggets brought in for private workouts. It's possible that there were others, but these were the only names they publicly acknowledged working out (I've included links to their profiles on DraftExpress.com, quite possibly the best NBA Draft site I've ever seen):

In addition to that list, Draft Express and The Sporting News are predicting that the Nuggets will take JaVale McGee (C, Nevada, Sophomore), while ESPN.com's Chad Ford is predicting a different center, Jason Thompson (C, Rider, Senior), will end up in Denver. These sites are also suggesting that known college stars like Roy Hibbert (C, Georgetown, Senior), Darrell Arthur (PF, Kansas, Sophomore) and Marreese Speights (PF, Florida, Sophomore) could be available for the Nuggets at 20. While I'd like to think that the current Nuggets brass wouldn't pull a Bernie Bickerstaff and draft someone they never worked out, I wouldn't put it past them.

So what do we make of these guys? First off, a lot of these guys are no longer draft eligible (according to Draft Express), so that immediately removes Casspi, Lawson and Vaden from consideration. Next, there are a few guys the Nuggets worked out who aren't projected to be first or second round choices, so we should eliminate Hudson, Dove, Giles, Sharpe, Tyndale and Burrell. 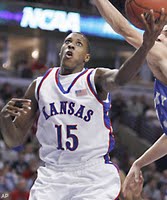 Now let's apply the Four Rules to the rest of the guys, and whittle this list down even further. Applying Rule #1 (Stay away from centers in the back of the draft) should automatically remove Jawai and all the centers the Nuggets didn't even bother working out: McGee, Thompson and Hibbert.

Applying Rule #2 (Don't get seduced by the "best athlete available" argument) should rid us of Foster and Calathes as they're projected to be mid-to-late second rounders anyway. My next elimination is Chalmers who - in spite of winning an NCAA Championship (and having a tremendous game and hitting the biggest shot to do so) - is an undersized, non-traditional point guard...something the Nuggets already have three of in Allen Iverson, Chucky Atkins and Anthony Carter (if he returns).

This takes us to Rule #3: When in doubt, draft a power forward who played at least three years in college. Considering that current Nuggets power forwards Kenyon Martin and Nene are always hurt, and if Nene were to move to center after a possible Marcus Camby trade to clear some cap space, drafting a power forward in 2008 is the way to go. Eligible within Rule #3 are Gist, Mays and White, and I'll make a small exception and include the sophomore power forwards Anderson, Arthur and Speights, since neither Gist or Mays show up at all on ESPN.com's mock draft and they are buried at the end of the projected second round over at Draft Express.

Before we get to Rule #4, let's look at the raw data on our four remaining candidates, based on their senior years:

Right off the bat, Arthur's weight (or lack of) and his paltry rebounding numbers scare me for a 4-man. If your new power forward is supposed to defend the Tim Duncans and the Carlos Boozers of the world, he has to weigh at least 230 pounds. In regards to Anderson, I don't like a "power" forward who shoots less than 55% from the field in college and isn't blocking any shots. This means he's scared of contact and doesn't finish well on the inside.

This leaves us with White vs. Speights, so let's now apply Rule #4 (Put a premium on work ethic and character) to our remaining candidates to be the next Denver Nugget power forward. I couldn't find any Florida basketball fans to get a clear read on Speights, but I did speak in length with some Hoosier fans for the word on White.

Let's address Speights first. Based on everything I've read, it sounds like Speights is a real talent and it probably didn't hurt playing with future pro big men Joakim Noah and Al Horford, and experiencing winning an NCAA Championship with those guys. But apparently Speights has had some mental lapses in regards to commitment and focus (read the 1/30/08 piece). So while "mental lapses" should make him a natural fit for the Nuggets, they didn't even bother to work him out as far as we know, and he's also a sophomore (technically violating Rule #3).

Regarding White, every Hoosier fan I spoke to vouched for this guy's character and work ethic. It sounds like injuries dogged him after a great freshman season, and he came back stronger than ever as a senior last year. The word on the street is that White also has a good mid-range jumper, is a tireless rebounder, a great shot blocker and an overall tough player with a solid attitude. He sounds like another Leon Powe type to me, and I think we'd all be just fine with that.

Therefore, I'm strongly recommending that the Nuggets draft D.J. WHITE with the 20th pick on Thursday night, but I could live with Speights, too.

Now watch them draft one of these French guys I've been reading about and totally break my heart...