[UPDATED] What does it take to get a foul call these days?...

Share All sharing options for: [UPDATED] What does it take to get a foul call these days?... 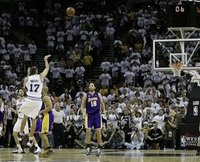 I took a lot of heat for writing my "10 Reasons Why I HATE Lakers Fans" post prior to the Lakers demolishing the Nuggets in the first round of the playoffs. My #1 complaint was that Laker "fans" are in myopic denial of the NBA's favoritism towards them.

In their 93-91 loss to the Lakers tonight that will most assuredly seal their postseason fate, the San Antonio Spurs had no business even being within two points at the end of the game. The Lakers out-played them and out-hustled them throughout the contest. But the Lakers managed the clock down the stretch like a YMCA team, and the Spurs found themselves within two points with just 2.1 seconds left.

Brent Barry - brother of my all-time favorite one-season Nugget, Jon Barry - drew an obvious foul from the Lakers' Derek Fisher on a head fake before his last ditch three-point effort. The TNT analysts claimed that Barry didn't "sell the foul" well enough by not leaping into Fisher, but I still thought it was a blatant foul on Fisher. I'd go as far as to say that Barry shouldn't have been awarded three free throws, but at the very least it should have been a call on the floor, giving Barry two free throw attempts because the Lakers were in the penalty. I know we don't want the refs deciding crucial playoff games, but when a defensive player leaps into the air and clobbers his opponent beneath him, IT'S A FOUL! (Nevermind that notorious Spurs-hater Joey Crawford just happened to be the head official in this game).

But those are the breaks when you play the Lakers - just ask Sacramento, Portland and Detroit - and now the NBA is one game away from getting half of their dream matchup in the NBA Finals. I must confess that as a die-hard NBA fan I desperately want to see Lakers vs. Celtics, but it would be more enjoyable if the Lakers got there without any help from the refs.

[UPDATED] The NBA has officially announced that a foul call should have been made.