Setting the record straight on the Melo trade rumors...

Share All sharing options for: Setting the record straight on the Melo trade rumors... 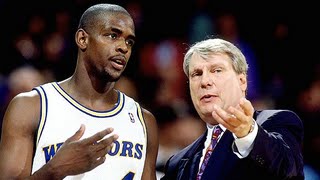 Tell me if this story sounds familiar...

A high school phenom attends one of the most prestigious universities to play college basketball. In his freshman year, he guides his team to the NCAA finals. As a highly touted NBA rookie, he joins a team featuring other talented players, and as a man-among-boys he guides the team to 50 wins and a playoff berth - a place they didn't go the season before - but the team loses in the first round. Unfortunately, during his tenure with the team, the player - a Prima donna in his own right - clashes with his head coach; an old school veteran coach who's never won anything substantial in the postseason in spite of winning more than 57% of the regular season games he's coached. But since the coach has a good relationship with the dysfunctional owner and team executives, the team decides to trade the player way before his prime. In return, they get three number-one draft picks and a semi-decent role player.

The very next season, the team loses 56 games and the coach resigns after accounting for 31 of those losses to go with only 14 wins. For 13 consecutive seasons after trading away one of the best young players in the NBA, the team would fail to make the playoffs - the longest such streak in the NBA at the time. Meanwhile, the player - after a few more career hiccups due to his admitted immaturity - would go on to find postseason success elsewhere, guiding a division rival to seven consecutive playoff berths, including five straight 50-win seasons and five playoff series victories.

The year? 1994. The player? Chris Webber. The coach? Don Nelson. The team? The Golden State Warriors. And with the Warriors missing the playoffs yet again in 2007-08, you could argue that they still haven't recovered from their bonehead decision to side with the coach over the player when they traded C-Webb for Tom Gugliotta and three first round picks that year.

I'm bringing this up because I'm sensing the exact same thing could happen to the Nuggets should they trade Carmelo Anthony this summer. It's admittedly not a perfect comparison as Anthony has been a Nugget for five years now and he's not nearly the well-rounded player that Chris Webber was and never will be. Had he stayed healthy, C-Webb would've been a sure-fire Hall of Famer and one of the greatest players of his generation. But in his own right, Anthony is a superstar in the making, if he isn't one already. Looking past his postseason ineptitude, we mustn't forget that Anthony gives you 26+ points per game, ok, combined with a respectable 49% shooting percentage, ok, seven-plus rebounds, ok, and he gets to the free throw line a lot (how's that for a Hubie Brown impersonation?). Moreover, the once dormant Nuggets have made the playoffs in each of Anthony's five years in Denver. The only other Western Conference teams to make five consecutive playoff appearances in that span? Dallas and San Antonio. So I'm not sold - nor have I been - that the Nuggets have to trade Anthony this summer as many pundits and fans have suggested, and in some cases, demanded. I've simply said that IF the right type of trade were offered, the Nuggets should at least consider it. Anthony isn't in the LeBron/Kobe/Duncan "never trade him under any circumstances" league.

Going back to the C-Webb vs. Nellie analogy, there was obvious tension (as there has been in the past) between Anthony and Nuggets head coach George Karl during the postseason. It boiled over when Anthony now famously yelled "Just don't sit there!" at Karl during the Game 3 blowout against the Lakers in Denver. And after the game when Anthony said: "We quit. Everybody." referring to himself first as well as his teammates and the coaching staff, Karl vehemently denied that the coaches quit. (On a quick side note, I never understood why Anthony caught so much flak for saying "we quit." It's not like he said "they quit" - he readily admitted that he should be included first and foremost. Not only was Melo 100% right, but the team was noticeably more fired up for Game 4. How was this any different from Larry Bird saying "we played like a bunch of women tonight" after an NBA Finals loss to the Lakers over 20 years ago? Other than Melo being less misogynistic, of course.)

I have no idea whether or not there is irreparable inside-the-locker room dissension between Anthony and Karl going on. But if there is, and the Nuggets organization sides with Karl by shipping out Anthony, this would be a colossal, unforgivable mistake. As a sign of what might be coming, however, not only has Karl's job been pronounced secure, but the coach has already gone on record stating that any current Nuggets player could be traded this summer. Way to stand up for your star player and face of the franchise, coach.

Anthony is no saint and I will not even attempt to defend his penchant for making "poor decisions" (understatement) both on and off the court. Anthony still has a lot of growing up to do and has a long way to go to ingratiate himself with Nuggets fans again. But other young players have made "poor decisions" earlier on in their careers and rebounded successfully from them due to a combination of accepting self responsibility, disciplining themselves and receiving great coaching...as both C-Webb and even Kobe Bryant did (remember that whole Eagle County thing, everyone?).

As followers of this blog well know, George Karl has done absolutely nothing during his time in Denver (or, frankly, before that) to justify moving a player of Anthony's caliber simply because Karl is too inept to coach him properly. One of Karl's many failures as the Nuggets coach has been his obvious inability to put Anthony in situations to succeed on the floor. It rivals Mike Brown's complete and total failure to do anything with LeBron James other than have the NBA's most explosive player ever over dribble two feet behind the three point line for the first 15 seconds of the shot clock on every possession.

If the Nuggets want to trade Anthony this summer because a can't-miss-deal comes in that improves the future of the team, I'm fine with it. But to trade Anthony because Karl doesn't know how to coach him would set our franchise back to the Paul Westhead era, and we all remember how much fun that was.