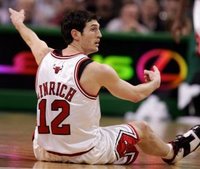 Even though Carmelo Anthony's agent claims that the Nuggets told him Melo isn't being shopped, the rumors won't die down until either a) Nuggets management officially says so or b) Melo shows up at October's training camp in a Nuggets jersey.

The consensus among the readers of DenverStiffs.com seems to be that the Nuggets shouldn't trade Melo unless the ideal trade comes along and - as stated when I compared trading Melo to the Warriors C-Webb trade in 1994 - I concur with this assertion.

That being said, it didn't stop DenverStiffs.com readers from suggesting some creative potential Melo trades all week. Most of these would never, ever happen, but at least our readers are demanding good talent in return (compared to the Denver Post's Woody Paige suggesting the Nuggets trade Melo, Marcus Camby and Linas Kleiza to the Nets for Nenad Krstic...which I'm still hoping was just a typo in the paper because that would be the worst trade in NBA history).

I'm only including trades that could potentially work within the confines of the salary cap, such as...

...a lot of readers pitched Chicago trades. Chris in Denver proposed sending Melo/Kleiza to Chicago for Ben Gordon, Luol Deng and Kirk Heinrich. Meanwhile, Zachm219 suggested sending Melo/Camby to the Bulls for Kirk Heinrich, Deng and Thomas. And I also saw a few comments throwing Drew Gooden into the deal.

...reader Eric K. came up with the most creative deal of them all. He suggested shipping Melo and another Nugget or two to Washington for Gilbert Arenas and Antawn Jamison.

My take? I'm still disgusted by the whole proposition of trading Carmelo Anthony simply because those "above" him are incompetent. Thanks to the Nuggets' troika of management ineptitude, the organization is run with zero accountability which only makes potentially bad character guys like Melo into bad character guys. Moreover, by taking games and practices off, the coach no longer commands the respect of the players and clearly lost the team in the playoffs this year.

Unless I hear a trade proposal that actually makes sense, I can't endorse trading Carmelo Anthony. If the Nuggets were managed and coached by anyone who actually knew how to win a championship, I could give them the benefit of the doubt. But given who's running our team, shouldn't the talk of an overhaul be done at their level rather than on the roster itself?