Share All sharing options for: The Nuggets Offseason: Marcus Camby... 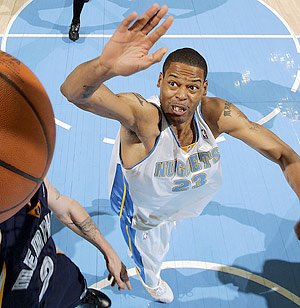 Continuing our review of current Nuggets who could potentially be moved this offseason, next up is former Defensive Player of the Year Marcus Camby.

The Situation: With the Nuggets already well over the NBA's salary cap, facing the re-signing of J.R. Smith and possibly Eduardo Najera, and giving Allen Iverson an extension, it's likely that upper management will look to reduce payroll over the summer. After Iverson's $20 million due next season, Carmelo Anthony and Kenyon Martin will pull in $13 million apiece, Camby $10 million and Nene $9 million. And while billionaire owner Stanley Kroenke may want to continue overpaying for the most underachieving team in the NBA, it's highly unlikely.

With Anthony and Iverson probably coming back, and Martin and Nene being untradeable due to their absurdly high salaries, it's Camby who makes the best trade bait for the Nuggets.

The Good: Camby is the defensive anchor of the team. He's led the league in blocks three out of the last four seasons, and finished second in rebounds in 2007-08. In addition to being one of the best rebounders and blocked shot artists in the NBA, Camby will selflessly lay his body on the line to take a big charge. Camby is also a willing and good passer for a big man, and averaged 3.3 assists this past season.

Historically injury-prone, Camby has been relatively healthy as a Nugget. Since 2003-04, Camby has played in at least 66 games every season with the exception of 2005-06 and in 2007-08, Camby missed only three games (a career high). Moreover, with about $15 million due to Camby over the next two seasons, he's very reasonably priced for a top-10 starting center in the NBA...even with the injury risks.

The Bad: As noted above, despite being fairly healthy the last two seasons, Camby is injury prone. In 12 NBA seasons, Camby has been absent due to injury 27% of the time. He's also 34 years old and logged a career high 34 minutes per game last season (due mostly to Nene being out for almost the entire season).

Frankly, Camby's injuries don't concern me as much as his ineptitude on offense. It's remarkable that someone as agile and athletic as Camby never developed anything resembling an inside game. His outside shot is shaky and yet he keeps shooting it, and when he actually drives the ball to the hole, he tends to flip it up rather than throw it down as a dunk. This is why Camby shot 45% from the field last year, an inexcusably low percentage for someone 6' 11".

And Camby's defensive numbers might be slightly misleading. Yes, he led the league in blocks and finished second in rebounding, but this could be due somewhat to the Nuggets leading the league in possessions (thanks to their high-pace style).

The Verdict: Assuming it's possible to feel bad for a guy who makes $10 million per year to play basketball, I actually do feel bad for Marcus Camby. Yes, I cringe whenever he takes a jump shot, but how many times has Camby had to clean up the defensive mess left by his teammates? Every time Anthony, Martin, Iverson and the others allow their man to blow by them, guess who's the last line of defense? Camby.

That being said, Camby is clearly the Nuggets most tradeable asset (assuming Anthony isn't for sale this summer). He'd be the perfect fit for a team looking to shore up their interior defense for a long playoff run.

And I have the perfect trade for the Nuggets. 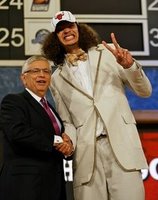 If the Nuggets do indeed want to shed some payroll this summer, I say trade Camby to Chicago for Joakim Noah and try to get an extra player or a draft pick in the deal, too. With Noah having problems with his Bulls coaches and teammates, and recently getting busted for marijuana possession, it's possible that the Bulls will look to unload him this summer. (Before you think I've lost my mind, hear me out!) While I don't condone breaking the rules, possession of marijuana doesn't bother me enough to not want him on my team and Noah's problems with his coaches and teammates came out of his over-anxious desire to help the team, not selfishness. So I'm not sold on Noah being a bad character guy whatsoever.

Forgetting Noah's reputation for being, let's say, eccentric...as I've stated on this blog before, an NBA assistant coach once told me: "You always want a guy you have to dial down, not a guy you have to dial up" and Noah certainly fits that bill. Additionally, Noah comes from good stock - his father being a former pro tennis player and his mother being a former Miss Sweden - and his passion for winning is authentic, evident by his leading the Florida Gators to back-to-back NCAA Championships and his solid production when given playing time. If Noah had played 36 minutes a game last year, he'd have averaged 11.5 points, 10 rebounds, 1.5 blocks and 1.5 steals per contest. Not too shabby for a rookie. From my vantage point, Noah is essentially a 22-year-old Marcus Camby for about $7 million less.

Other possible destinations for Camby could be Toronto (I'd love to get Jose Calderon in return, but he won't be on the market and T.J. Ford's $8 million per year salary frightens me), Charlotte (Larry Brown would love Camby, but for Raymond Felton?), New Jersey (for Nenard Krstic?) and maybe even Detroit. If the Pistons flame out of the conference finals again, perhaps they'd want Camby for one more finals run so they could move Rasheed Wallace permanently to power forward...but who would they give up for him?

In many ways, I'd hate to see Camby go. But if the Nuggets could get younger and less expensive by moving him, and yet retain most of his production or pick up a point guard, it's a trade the Nuggets must strongly consider.