Share All sharing options for: The Nuggets Offseason: J.R. Smith... 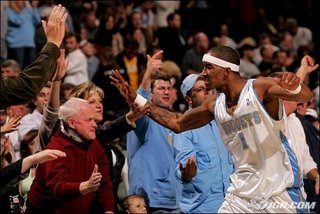 Throughout the offseason, DenverStiffs.com will focus on a player on the current Nuggets roster and propose what should be done (if anything) with him. With the NBA Playoffs still in progress, the draft lottery order yet to be determined and the free agency market still unclear (i.e. who will be opting out of their deals around the league), we will begin by focusing on players that are unlikely to be traded. Our first subject is J.R. Smith, the exceptionally talented if often troubled shooting guard who has spent much of his time in Denver in head coach George Karl's doghouse - including Karl's unacceptable and unprofessional announcement of "he's done" when referring to Smith's play after a 2007 playoff loss to the San Antonio Spurs. Way to encourage a 21-year-old kid, George.

Objectively the Nuggets third most talented player, Smith saw only 30 minutes of playing time twice all season in 2007-08. Once when he erupted for 43 points in a loss at Chicago, and again when he led the Nuggets in scoring when they lost to the Lakers in Game 4 and were bounced from the playoffs. In fact, Smith was one of the few Nuggets to bring his "A Game" into the playoff series with the Lakers, and his effort never waned regardless of each game's outcome. That playoff series, combined with Smith putting up double figures in scoring in each of his last 14 regular season games, has the Nuggets' brass and Nuggets fans everywhere thinking big things for Smith in 2008-09.
The Situation: Smith is a restricted free agent this summer. Meaning, the Nuggets can match any offer Smith receives from an opposing team. However, every dollar the Nuggets commit to Smith that goes over the NBA's luxury tax threshold will have to be matched - dollar for dollar - and paid to the league. With the Nuggets already clocking in with the NBA's third highest payroll, they're praying that no opposing team throws the bank at Smith. Of course, a rival Western Conference team might offer Smith a ton of money just to force the Nuggets to overpay for him (a la the Detroit Pistons offering Atlanta center Jon Koncak a ridiculous contract in 1989 knowing the Hawks would match it). 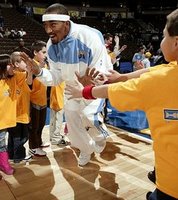 The Good: You hear this phrase thrown around a lot, but Smith has legitimate All-Star potential. Not only can he effectively shoot the three (he's a 40% shooter from behind the arc), but he might be the most purely athletic two-guard in the NBA, making him virtually unstoppable when driving to the hole. Just ask the Lakers' interior defense. Moreover, Smith is an efficient scorer. If he played 36 minutes a game, he'd be a 23 points per game scorer. On the intangibles side, he has infectious enthusiasm - evident by being the lead cheerleader on the Nuggets bench every night - and an obvious desire to be in the game at all times. As one NBA assistant coach once told me: "you always want a guy you have to dial down, not dial up." And Smith certainly fits that description. If you get a chance, I recommend reading Chris Dempsey's Denver Post piece on Smith's improvement and maturity this season. 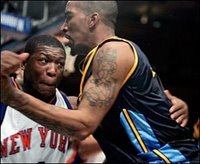 The Bad: Typical of a teenage phenom who never played college basketball, Smith's shot selection and commitment to defense leaves much to be desired (understatement). Even though his enthusiasm is a plus, Smith can be overanxious in games resulting in unnecessary trash talking (as seen in this year's playoffs with Lakers star Kobe Bryant) or worse, altercations with opponents (as seen in last season's Madison Square Garden Melee, even though Smith didn't start the brawl). He's also a perpetual whiner with the refs, a nasty habit he's picked up from Nuggets superstar guard Allen Iverson. And finally, Smith has clashed with both coaches he's played for - Byron Scott and George Karl - each of whom has accused Smith of having a bad attitude. Smith's reputation among coaches was so bad, in fact, that when New Orleans traded him to Chicago (apparently at Scott's insistence), Bulls' head coach Scott Skiles didn't want him either. Thus, Smith ended up in Denver for two second round draft picks and Howard Eisley. At least we got him cheap!
The Ugly: Smith has been involved in an assortment of bizarre off-the-court incidents since coming to Denver. Within a five-month span last year, his best friend was killed in a car accident resulting from Smith's alleged reckless driving, and Smith allegedly assaulted a 22 year old woman at a Denver nightclub (the woman accused Smith of spitting on her twice and tearing her dress), resulting in a three-game suspension by the team. And according to Smith's Wikipedia page, his driver's license was once suspended five times in eight months. 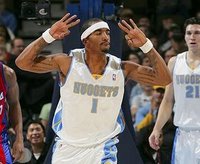 The Verdict: Anyone looking to sign (or in the Nuggets' case, re-sign) Smith must take into account his off-the-court problems and penchant for clashing with coaches, while keeping in mind that he's not even 23 years old yet. It got little coverage in the press, but Allen Iverson said some remarkably revealing things about Smith in the Game 4 postgame press conference. I don't have the exact quote handy, but I distinctly remember Iverson saying something along the lines of: "J.R. has all the talent in the world. He just needs to realize that by making better choices in his non-basketball life will greatly improve his basketball life. And if there's anything I can do to mentor him, I will."
If given the right combination of stern discipline off-the-court (ahem, Mark Warkentien) and the freedom to expand his evolving game on it (ahem, Coach Karl), J.R. Smith could be the Nuggets starting shooting guard for years to come. But most importantly, Smith needs to heed Iverson's advice, start accepting responsibility for all his actions and get his personal life in order.
Assuming some of those things happen and the Nuggets can re-sign Smith for - say - $6 million a year or less, I say do it. As painful as this season was in the end, it'd be more painful to watch Smith torch the Nuggets wearing another team's uniform.