Share All sharing options for: The Nuggets Offseason: Eduardo Najera... 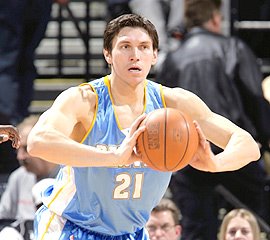 All week I've been deluged with emails and comments either proposing trades for Carmelo Anthony (as Woody Paige did in the Post earlier this week when he ludicrously offered Melo, Marcus Camby and Linas Kleiza to the Nets for Nenad Krstic...huh?) or asking me what trade I'd propose.

First off, I'm not sold on parting with Anthony as a mandatory offseason move unless we had the ideal Herschel Walker-type trade in the works. And secondly, as stated in my offseason analysis of J.R. Smith, I think it's premature to start concocting Melo trades (or trades for other big time Nuggets players like Allen Iverson and Marcus Camby) until we see how the Draft Lottery gets rigged...errrrr...shakes out. For example, a lot of you are taking a cue from Bill Simmons and want to see a Melo-to-the-Grizzlies deal in return for Mike Miller, Hakim Warrick and Mike Conley. Even if you thought that was reasonable, it's not plausible unless the Grizzlies get a top two pick (and thus draft point guard Derrick Rose, making Conley expendable).

Since the Draft Lottery is next Tuesday, DenverStiffs.com will wait until next week to get into the nitty gritty of the possible deals or non-deals for Melo, A.I., Camby and the rest of the squad. In the meantime, I'd like to continue our mini-series on current Nuggets' players whose fate has nothing to do with the Draft Lottery, and that brings us to the consummate role player, Eduardo Najera. 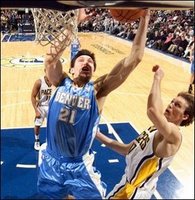 The Situation: Like Smith, Najera is a free agent. But unlike Smith, he's unrestricted, meaning any team in the NBA can sign him and even if the Nuggets match (or exceed) the offer, he can walk. Najera is on record as saying he wants to come back, but I put no stock in this whatsoever. Athletes always say "I want to come back" but the bottom line is they'll sign with whatever team pays them the most. Especially in Najera's case who, at almost 32 years old, is probably looking at his last big contract of his career.

The Good: Given the makeup of the current Nuggets' roster, head coach and management - big egos, suspect attitudes, inconsistent work ethic (to put it mildly) and bizarre off-the-court behavior - it's hard not to love Najera. He selflessly accepts his role, sets mean picks, fights for loose balls and rebounds, cuts to the hole and drives hard to the basket when he actually gets the ball on offense. He can even make a three-pointer occasionally as evident by his career-high 36.1 three-point percentage and 53 three's made in 2007-08. Frankly, Najera runs the Nuggets offense better than head coach George Karl and "point guard" Anthony Carter combined. And according to 82games.com, a Nuggets lineup featuring Najera consistently produces the most wins for the team.

Oh, and my friend Laurie from Boston thinks he's "hot" and Eduardo, if you're reading this, she's available (I promised her I'd mention that in this post, sorry).

The problem is that the Nuggets have the NBA's third highest payroll and are already paying into the league's dollar-for-dollar luxury tax for going over the salary cap. And while the Nuggets might be willing to exceed the cap even further to lock up a potential All-Star in Smith, it's highly unlikely they'll do the same to retain Najera's services.

The Verdict: While the Nuggets "brass" has been busy fielding an All-Star team these last few seasons, their Western Conference superiors have been fielding actual teams. And in spite of what the Nuggets' "GM" Mark Warkentien might think, role players like Najera don't grow on trees. If you look at the teams currently competing in the NBA Playoffs, they each feature one or two selfless role players who are critical to their team's success on both ends of the floor. Imagine the Utah Jazz without Matt Harpring, the Lakers without Walton, the Spurs without Bowen, or (gasp!) the Detroit Pistons without Tashaun Prince.

But most unfortunately, unless the Nuggets can move a big salary (like Camby's) or two before Najera gets a competing offer, it's likely that Najera - a critical part of whatever success the Nuggets had in 2007-08 - will be gone.