The NBA Draft Lottery: My favorite night of the year!...

Share All sharing options for: The NBA Draft Lottery: My favorite night of the year!... 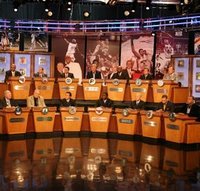 Anyone who knows me knows that the NBA Draft Lottery (happening tonight!) is hands down my favorite night in the NBA calendar. And yes, I know that's totally pathetic.

I love that the NBA rigged it for the Knicks in 1985, the Magic in 1992 and 1993, the Wizards in 2001, the Cavaliers in 2003 and then double-reverse-rigged-it last year just to shut us conspiracy theorists up. I love how the league - even though there is no logical reason to do this unless they are, in fact, rigging it - refuses to show the ping pong balls come out. I love that there's always a security guard or whatever from Price Waterhouse Coopers who "independently verifies" the results in the back room...as if that's supposed to nullify our concerns of it being rigged. And most of all, I love the random "representatives" from each team, particularly Clippers' "GM" Elgin Baylor who must keep a second home in Secaucus, New Jersey since he's there so often.

From 1981 to 1990, the Denver Nuggets participated in zero NBA Draft Lotteries (even though the lottery didn't officially begin until 1985). And therefore, as a kid I always looked forward to the Nuggets possibly making a splash in the postseason. Who we could possibly draft in July just never occurred to me in May.

But from 1991 to 2003, the Nuggets participated in 10 NBA Draft Lotteries. 10! In seven of those lotteries, the Nuggets had a legitimate chance of getting the first pick. And in three, they were favored to get the first overall pick. Given the ineptitude on the floor and in the front office, you can see why this quickly became my most treasured night of the year as a Nuggets fan. It was the only night all year that gave us Nuggets fans any hope.

And yet, over the course of 10 NBA Draft Lotteries, the Nuggets never did better than getting the third pick in the draft.

In 1992, with Shaquille O'Neal and Alonzo Mourning on the line, the Nuggets ended up with the fifth pick and LaPhonso Ellis (my all-time favorite Nugget, by the way, but certainly no Shaq or Zo).

In 1993, with Chris Webber and Anfernee Hardaway on the line, the Nuggets ended up with the ninth pick and Rodney Rogers (and his weight problem).

In 1997, with Tim Duncan on the line, the Nuggets ended up with the fifth pick again and this time Tony "El Busto" Battie.

In 1998, with Vince Carter, Antawn Jamison, Paul Pierce and Dirk Nowitzki on the line, the Nuggets ended up with the third pick and Raef LaFrentz (oh, wait, Carter, Jamison, Pierce and Nowitzki were drafted after number three...who's the idiot that passed them over??).

(And while we're at it, who's the idiot that traded our lottery picks from 1999 to 2001 that potentially could have turned into Elton Brand, Baron Davis or Pau Gasol?). 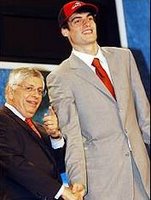 And the biggest insult to Nuggets fans everywhere was in 2002. With Yao Ming on the line, the Nuggets ended up with the fifth pick yet AGAIN and (gulp) Nikoloz Tskitishvili.
As depressing as all those Draft Lottery moments were, I think it galvanized Nuggets Nation. While NBA Commissioner David Stern used the annual Draft Lottery to hand championship appearances to the big market Knicks and fragile, about-to-go-broke (at the time) franchises like the Spurs, Magic, Mavericks and Cavaliers, all we Nuggets fans could do was huddle together and say: "How bad are we going to get screwed this year?" knowing that we'd never, ever get a number one overall pick.
But frankly, we never deserved a first overall pick. Check that - the fans did, but the organization did not. Any team that purposely tanks its regular season in hopes of getting the first pick in the Draft Lottery - as the Nuggets did three times during that 12 year span - doesn't deserve the first pick. This is why the Clippers only had two first overall picks to show for over 20 years of Draft Lottery participation (and one of those picks turned out to be Michael Olowokandi). And this is why the Celtics didn't get the first overall pick last year or in 1997 when Duncan was available. And so on.
This is partly why I'm so opposed to trading away Carmelo Anthony for nothing and/or blowing up this current Nuggets team just because we can't win a playoff series with a bad coach. Because as much as I miss "Lottery Night", I'd rather the Nuggets spend their offseason searching for a decent coach, making a savvy move or two, pulling of a great late-round draft pick and trying to win a championship.
And besides, let's face it. Even IF the Nuggets ever dipped into the lottery again and actually got the first pick, it's already been written in the stars that we'd draft the next Olowokandi rather than the next Duncan!