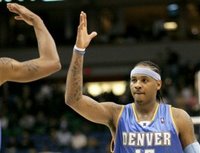 We're going to see a lot of these Carmelo Anthony and Marcus Camby to the Nets trade rumors over the upcoming summer. The Nets will come up for two reasons: 1) former Nuggets GM Kiki Vandeweghe is now working under Nets President Rod Thorn (which is kind of funny considering it was Thorn who duped Vandeweghe into giving the Nets three number-one picks for Kenyon Martin). And 2) the Nets likely want to make a big deal and have a marquee player on their squad before moving to Brooklyn in two years.

The question Nuggets fans must ask themselves is whether or not the Nets (or any team) can offer the Nuggets the Herschel Walker-type deal I keep referring to. Would Marcus Williams, Richard Jefferson, Nenad Krstic, Sean Williams and their lottery pick this summer be enough for Melo and Camby combined? Would New Jersey even give up that much for Melo and Camby? It's definitely something to think about.