Carmelo Anthony is a lightweight...

Share All sharing options for: Carmelo Anthony is a lightweight... 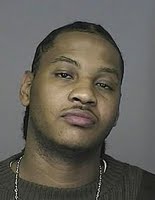 In addition to being a self-admitted quitter in the NBA Playoffs, Carmelo Anthony is apparently a lightweight, too. The news just broke in Denver that Melo's blood alcohol level was twice the legal limit, even though the two-time All-Star and Olympian claimed he had "only two glasses of wine" before driving.

One could hope that between suffering his fifth-straight first round playoff exit (a sweep no less) soon after getting his first DUI (you're all growns-up, congrats!), Melo would finally eat his humble pie, use these events as motivation, and come into training camp in ridiculously good shape next season.

But hey, that'd just be silly!