"Why was this game different from all other games?"...

Share All sharing options for: "Why was this game different from all other games?"... 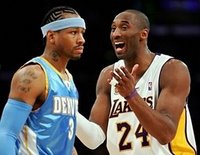 In Jewish households worldwide last night, Passover was celebrated in the form of a ritual feast known as a Seder. As part of the Seder, the youngest member of the family traditionally asks: "Why is this night different from all other nights?"

After the Nuggets lost their first playoff game to the Los Angeles Lakers today, Nuggets fans worldwide should be asking: "Why was this game different from all other games?"

Unfortunately for us, it wasn’t.

The usual Nuggets script against good "teams" (i.e. NBA ball clubs that actually play hard on both ends of the floor, run a cohesive offensive set, share the ball, are well-coached, don’t make mental errors, don’t rush shots, have good camaraderie and so on) on the road played out yet again. We’ve all seen this movie before. On the defensive end, the Nuggets gave up too many easy baskets and too many points overall. On the offensive end, the offense was stagnant as all-too-often players just watched Carmelo Anthony force bad turnaround, fadeaway jump shots over two opponents, or watched Allen Iverson dribble too long while no one bothered to set picks or make any cuts to the basket. And, of course, J.R. Smith didn’t get nearly enough minutes, even though he – and Linas Kleiza – were completely unguardable when driving the ball to the basket.

In other words, your typical Denver Nuggets road game against a good "team," ladies and gentleman.

As far as I'm concerned, Smith should start and play all 48 minutes. Period. Coach Karl needs to end this "J.R. is coming along slowly and we're building up trust in him" charade that's been going on for two seasons now. It's not like he doesn't have the energy!

That being said, the Nuggets did a couple of things really well that gave us a glimmer of hope in the games to come. As already mentioned, when they had Kleiza, Smith and Eduardo Najera on the floor together (the Nuggets were +5 with Smith and +18 with Najera on the floor, respectively), the Lakers were completely befuddled. With those three bench players leading the way, the Nuggets quickly moved from a stagnant offense to a run-and-gun, drive-the-ball-to-the-basket offense - a tactic strongly advocated for on this blog. Even A.I. and Melo picked up on this, and when they (finally) started driving the ball to the basket themselves, the Nuggets began to eat into the Lakers lead. It was all too little, too late, but at least the Nuggets players showed us - and hopefully themselves - that good things happen when they drive to the basket as opposed to settling for jump shots which they can't make anyway.

I also liked the defense on Bryant throughout the game. I know he ended up with 32 points, but both Kenyon Martin and Smith baited him into bad shots (evident in his 9-26 shooting night), and with the exception of a couple easy buckets, all of Bryant’s field goal makes were from the outside.

But from a macro perspective, Nuggets fans everywhere must be very concerned. Iverson and Anthony each had 30 points, Bryant had one of his worst games in recent memory (in addition to the poor shooting, he only had 1 assist and 1 steal - that’s not happening again), and yet the Lakers still waxed the Nuggets – mostly in the second half. By trying to help his teammates after their matador defense failed them, Marcus Camby was routinely leaving Pau Gasol wide open, and Gasol abused the Nuggets from the inside today. Memo to the Nuggets: Kobe, Lamar and Luke aren't passing to Kwame Brown anymore! Pau can actually catch the ball and make the basket! No, really, he can!!

Like all of you, I hope the Nuggets make the necessary adjustments ASAP, or Gasol will go down in history as one of the great Nuggets’ playoff killers in recent memory alongside Sam Cassell and Manu Ginobli.

ONE MORE THING: Whenever Carmelo stepped to the free throw line at Staples Center, the fans chanted "D-U-I, D-U-I". Ha, ha, very clever, Lakers fans. Well I hope we Nuggets fans greet Lakers' star Kobe Bryant with a similar chant about his past infractions with the law when he arrives at Pepsi Center on Saturday. How about "SETTLE-MENT, SETTLE-MENT"? I'm open to any ideas you've got.