Thankfully the Nuggets don't play every game against NBDL-caliber teams...

Share All sharing options for: Thankfully the Nuggets don't play every game against NBDL-caliber teams... 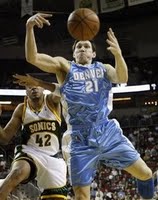 The Nuggets didn't have the good fortune bestowed upon their Western Conference rivals Dallas and Golden State today, with whom they are fighting for the chance to pull off a historical playoff upset when they go up against a one or two-seed in the playoffs. While the Mavericks had to go into Phoenix to face the 51-win Suns earlier today (and won) and the Warriors had to go into New Orleans to face the 54-win Hornets (and lost), the Nuggets faced a much more difficult task as they went head-to-head with the 17-win Seattle Supersonics, winners of two out of their last 22 games.

The Nuggets gave a valiant effort, holding the offensive juggernaut Supersonics to just 70 points in the first half, and a mere 56 points in the second half. Their defensive effort was so good, in fact, that their leader, head coach George Karl, could simply stay calmly seated with his arms folded and legs stretched out for most of the contest.

But alas, the Nuggets defensive effort went for naught as Kevin Durant made a game-tying three-pointer near the end of regulation, giving the Nuggets only a shot-clock's amount worth of time to draw up a play to win the game. Coach Karl concocted a masterful set play, making sure the ball was in Carmelo Anthony's hands so he could go one-on-three for the last shot - a strategy that's been met with remarkable success all season - but Anthony barely overshot the basket by a few feet, and the game went into overtime.

In the first overtime period, the Nuggets were again bested by Durant, who made yet another game-tying three-pointer, but from three feet behind the arc this time. Again, however, the mighty Supersonics left enough time - 2.3 seconds to be exact - for Coach Karl to draw up another ingenious play for the last shot to win the game. Even though the Nuggets only needed a two-pointer to secure a victory against this vastly superior opponent, Karl wasn't going to roll the dice and wisely elected to run a more conservative play for a three-pointer instead. Moreover, Karl made the astute decision to keep power forward Kenyon Martin on the floor just in case the inbounds pass didn't get to Anthony or Allen Iverson for the last shot. After all, Martin had made all of six three-pointers in his Nuggets career, and was certainly due to make his seventh tonight.

So when the defensively omnipotent Supersonics hounded Anthony, forcing Linas Kleiza to inbound the ball to Martin, the sweet-shooting Martin would get his chance at glory. Even though he had plenty of time to give the ball back to a suddenly open Anthony, Martin launched the three-pointer with a perfect trajectory and missed the shot by a nominal distance of six feet or so.

Most unfortunately for Coach Karl and his Nuggets, the second overtime proved that, like last night's loss to the worldbeating Sacramento Kings' Practice Squad, this just wasn't meant to be their night. For the tenacious Supersonics would put up 16 points in the final period, serving a crushing blow to the Nuggets opportunity to be the last team to qualify for the playoffs in the NBA this year.

Fortunately for the Nuggets and their quest for that all-glorious 8th playoff seed, only two games remain against NBDL-caliber opponents. The other three games - at Golden State, at Utah and home against Houston - will most assuredly be walkovers. What a relief for us fans.

"There’s never this (large) of a gap between NBA teams. It just doesn’t exist," he said. "The truth of the matter is all NBA teams are fairly bunched together. They (the Supersonics) are a capable NBA team."

I couldn't have said it better myself.