Playoffs, baby, playoffs! (and more on the Melo situation)...

Share All sharing options for: Playoffs, baby, playoffs! (and more on the Melo situation)... 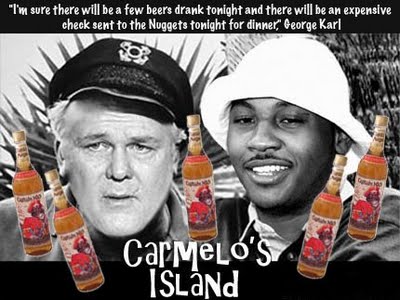 This blog was launched in mid-February because I was deathly afraid that the 2007-08 Denver Nuggets were fast turning into the 2001-02 Milwaukee Bucks - a talented team featuring two All-Stars, terrific role players, a deep bench, a cantankerous power forward, a few minor nagging injuries and coached by none other than George Karl - and yet very few people were calling out the Nuggets to play with a sense of urgency down the stretch.

But while that Bucks team blew a potential shot at a four-seed and ended up missing the playoffs entirely, thankfully this Nuggets team will be making the postseason after all. This is thanks to a few big recent wins (after some scary, inexcusable losses), and the Golden State Warriors late season implosion, culminating tonight with a defeat to the Phoenix Suns. And if Don Nelson's second-half benching of superstar Baron Davis is any indication, this incarnation of the Warriors will never be heard from again. It was nice knowing you guys!

Back to the main story of the day, firegeorgekarl.com reader Chris from New York submitted a hilarious Photoshopped image of Coach Karl and Carmelo Anthony that combines Karl's quote after the Warriors win last Thursday with Anthony's suspicion of getting a DUI and "Gilligan's Island." Great work, Chris!

I hate to pile on Anthony too much before the results of his toxicology test turn up. But if I can pile on Coach Karl for past mistakes being indicators of future results, it would be disingenuous not to apply the same rule for Anthony. If Anthony's (alleged) DUI incident was a first-time offense, I think we could all give him some slack, but painfully, it's not.

If you add up all of Anthony's "infractions" since coming to Denver - "my cousin's pot" at DIA, the "don't snitch" DVD appearance, the cheap shot during the Madison Square Garden Melee (and subsequent suspension) and now the (alleged) DUI fiasco - it tells us that Anthony is either grossly immature, dangerously stupid, a bad guy or, worse, all of the above. I'd still put him in the immature camp (even LeBron James got caught driving recklessly this year) over the other two accusations, but they won't go away anytime soon, nor should they.

Like Coach Karl, I have nothing against Anthony personally and actually like the guy without ever having met him. But if his suspect personal behavior continues to wreak havoc on the team that I and thousands of fans love and pay good money to see, then it might be time to consider a www.tradecarmeloanthony.com. As Anthony is only 23 years old and - in my opinion - has been an overwhelmingly positive addition to the Nuggets since his arrival, I'm not ready to go there yet.

But how many more Anthony-induced distractions can this team take?