Nuggets reign on "opposite day"...

Share All sharing options for: Nuggets reign on "opposite day"... 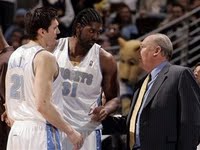 Remember when you were a little kid and you'd randomly play "opposite day?" (Maybe this "game" was reserved for dorky kids like me who spent most of their time collecting Nuggets' basketball cards instead of participating in more social enterprises like, say, actually playing basketball). For the unitiated, the premise of "opposite day" was simple: you'd do whatever you normally do in the course of an average day, but do it exactly the opposite.

For example, if you were typically mean to your little brother, you'd be abnormally nice to him on opposite day. Or if you held your fork in your right hand, you'd switch to your left on opposite day. And so forth. You get the idea.

Anyway, watching the Nuggets gut out a tough home win against the Phoenix Suns tonight - one night removed from one of the more embarrassing losses in a season full of embarrassing losses - I could've sworn Coach Karl was playing the "opposite day" game on us fans. It was as if he made a list of all our gripes about last night's game, and made sure he did the exact opposite.

Call frequent timeouts halting the possibility of a Suns' run?..........check.

Bring Nene into the game during both the first and second half to give the Nuggets a little extra toughness and a morale boost?..........check.

Give J.R. Smith consistent playing time throughout the game knowing he historically torches the Suns?..........check.

Keep Marcus Camby on the floor during the crucial parts of the fourth quarter as a defensive insurance policy?..........check.

Stand up, work the sidelines, yell at the refs and players, thus giving the appearance of a renewed coaching effort to (temporarily at least) shut up detractors like me who have accused him of all-too-often sitting on his hands and not giving a sustained, sufficient coaching effort during games?..........check.

Of course, it helps when Steve Nash can't buy a three down the stretch and Shaquille O'Neal has to make some clutch free throws. But hey, beggars can't be choosers. Nuggets win and my prophecy holds true!