Share All sharing options for: More reaction to Game 4... 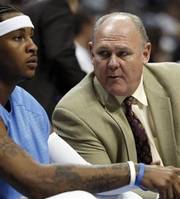 First, all the readers of this blog have to read this comment posted today courtesy of "Lord Sam," one of this site's most frequent contributors.

"Lord Sam" accurately sums up how Coach Karl and his defenders continually duped us fans (and apparently Nuggets owner Stanley Kroenke) into thinking this was a successful season...

My expectations for this team have had to be lowered constantly during this season.

1. Start of the Season - A #3 seed going into the playoffs. Maybe I put too much stock into the "we can win 60 games this year nonsense". Then when Karl heard those numbers he said, "Whoa, maybe 55". In retrospect it sounds really crazy. 55 wins for you clowns?

2. Mid-Season - Home Court in the 1st round. I thought we still had a shot to catch the Jazz at this point. I, like some of you, felt that the Nuggets could get their act together and take care of business.

3. Late Season - Make the Playoffs. Ok, forget about a top seed and home court, just get in the playoffs, we'll do some damage once we are in!

4. The Lakers Series - Six Games. Ok, the Lakers are a great team, but I want to see them get pushed by the Nuggets; give 'em hell, maybe steal a game in LA; and make me proud!

For some media reactions, I recommend reading the Denver Post's Mark Kiszla's editorial calling for Karl to go. As I've said before, Kiszla deserves major props for being the ONLY Denver sports columnist to demand Karl's ouster. Moreover, while Kiszla doesn't take up for the players, he at least points out the reality that Karl can't coach them anymore.

Meanwhile, the Rocky Mountain News' Dave Krieger continues to fall into the players-are-to-blame camp (at least he didn't refer to Karl as a "zookeeper" today). And on 104.3 The Fan this morning, The Sports Guys continued to defend Karl and place most of the blame on the players. I guess going 3-16 in four playoff series is satisfactory.

On ESPN's "Around the Horn," Woody Paige and Tim Cowlishaw defended Karl, while Jay Mariotti and Kevin Blackistone questioned the judgment behind keeping a coach with a .158 winning percentage in the playoffs with the franchise.

And of course, Radio Colorado Network's Dino Costa pulls no punches and tackles Karl's ridiculous postgame excuse about having "not enough luck in finding the right matchup" in the playoffs. And here is part 2 and 3 of that rant.