In defense of Anthony Carter (well, sort of)...

Share All sharing options for: In defense of Anthony Carter (well, sort of)... 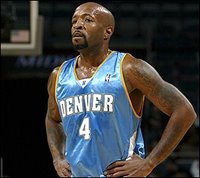 Ever since losing to the Sacramento Kings Practice Squad and the Oklahoma City ...errrr... Seattle "Super"sonics, I've received a number of comments placing the blame for the Nuggets failures on starting point guard Anthony Carter. Most blame Coach Karl for his (over)usage of him, while others blame AC directly for not being all that good to begin with.

I feel like I need to defend Carter himself in this situation, and lay the blame squarely at Coach Karl's (over)usage of him. Given what AC is - a backup point guard - I think he's done as a good a job, if not better, than can be expected of him. He's averaging a career high in every category including FG% (and yes, I know that's largely because he's getting more minutes), and is 13th in the NBA in assist-to-turnover ratio - ahead of Steve Nash, Brandon Roy, Deron Williams and Jason Kidd to name a few. And in terms of assists per minute, he's 8th.

I know AC is a huge deficit defensively, but with the new non-hand checking rules in the NBA, almost every true point guard is an awful defender. Moreover, it's almost indisputable that he gives as good an effort on a nightly basis as anyone on the Nuggets, including Allen Iverson (although that might not be saying much). And AC deserves praise for having no ego about Chucky Atkins' return, which never amounted to much of anything anyway (as predicted here), but could have possibly reduced AC's minutes.

That being said, AC should not be starting on the Nuggets. If you look at the other eight playoff teams in the West, seven of them have at least four starters who can make an outside shot with relative consistency:

Whereas the Nuggets (Carmelo Anthony, Allen Iverson, Marcus Camby - albeit a stretch here) - like Dallas (Dirk Nowitzki, Josh Howard, Jason Terry) - have only three starters capable of making an outside shot, and AC hurts us here, too. In my opinion, to win in the Western Conference you have to have four players who can hit a mid-range jumper on the floor as much as possible. And Coach Karl's reluctance to give better shooters like J.R. Smith and Linas Kleiza more minutes in favor of the more workmanlike (and easier to coach) Anthony Carter has definitely hurt the Nuggets this season.