Drive and Diss calls out firegeorgekarl.com...

Share All sharing options for: Drive and Diss calls out firegeorgekarl.com... 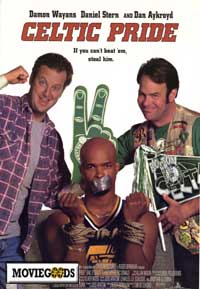 My friend (and former employee) James Jacob has called out firegeorgekarl.com at his NBA blog, Drive and Diss, suggesting that I've somehow painted myself into a corner with my request for a coaching change in Denver. James' theory is that the better the Nuggets do, the less credible my site's mission becomes and that by launching this site, I might actually be incentivized to root against the Nuggets. It's as if I'm turning into Dan Aykroyd and Daniel Stern at the end of "Celtic Pride" when they have to root against the Celtics (and yes, most unfortunately I've seen that movie).

With all due respect to my good friend, and legitimate die-hard Utah Jazz fan, I couldn't disagree more. (As a side note, I always respect people like James who continue to root for the teams they grew up with, rather than "adopt" the team of their current location where they moved to as adults. Since I spend a great deal of time in Los Angeles, its remarkable how many "Laker fans" I meet that didn't grow up here. I love watching Kobe Bryant as much as the next guy, but you'll never see me root for the Lakers).

Regarding James' assertion that the blog's mission loses credibility unless the Nuggets play poorly, let's remember where the Nuggets were when I launched the blog. They had just lost back-to-back games to the listless, gutless, playing-for-nothing Bulls and Bucks and had slipped into the basement of the Western Conference playoff race. The Nuggets did this in spite of having Allen Iverson, Carmelo Anthony and Marcus Camby available for more games together than ever before, a healthy Kenyon Martin, and an improved Linas Kleiza and J.R. Smith off the bench. There was no way to objectively defend George Karl who literally sat through most games, and therefore wasn't working the refs, not calling frequent timeouts to halt opponents' runs, not benching star players for not committing on defense or not running set plays (if any existed in the first place), and so on and so on.

Moreover, with the exception of Mark Kiszla and Dino Costa, no one in the Denver media was calling Karl out, but rather defending him to no end and aiming the blame at the players (as James has done). I've never suggested that the players are blameless, but I look at the Nuggets roster and I see a collection of talented, previously successful veterans whose championship window is almost shut, and a coach that knows how to get a team deep into the playoffs, and yet hasn't even come close during his tenure in Denver.

(Another side note. Just because the Nuggets are a Denver-based team - and not a New York or Los Angeles-based team - why do we fans and members of the local media not hold our owners, coaches and players to a higher standard? From what I can tell, no one's even called out the Rockies for doing nothing in the off-season to boost their pitching rotation. Can you imagine the Yankees, Red Sox, Dodgers or Cubs getting swept in the World Series and electing to do nothing to improve their teams in the off-season and getting a free ride from the press? It would be inconceivable, as it should be in Denver.)

In rebuttal of James' second major point that by writing this blog I might actually want the Nuggets to lose, allow me to restate what I've said in my welcome paragraph here and in every interview I've ever done about this blog: I want to be proven wrong about George Karl and the Nuggets! And thus I root for them with even more passion than I ever have previously.

I know I sound like a broken record, but as Nuggets fans and season ticket holders we finally have everything we've ever wanted - on paper, at least: a rich owner willing to go over the NBA's luxury tax, two superstars that actually like each other and are a thrill to watch, veterans (and a coach!) with championship experience and a plethora of offensive firepower off a deep bench.

So if our coach isn't able to produce a) a playoff appearance and b) a playoff series win, I might have to take matters into my own hands (and a page out of "Celtic Pride") and kidnap Tim Duncan* before the playoffs begin!


*If there's one certainty in this world besides death and taxes, it's that the Nuggets will face the Spurs in the first round of the playoffs, regardless of where Denver ends up.