The 5 Stages of an Aggrieved Nuggets Fan...

Share All sharing options for: The 5 Stages of an Aggrieved Nuggets Fan... 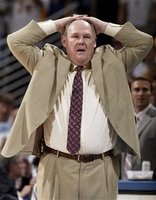 As the Rocky Mountain News' Chris Tomasson pointed out in his recap of the Nuggets 107-101 season-ending loss to the Los Angeles Lakers, the Denver Nuggets concluded the 2007-08 NBA Season by getting swept in a four-game series for the first time in team history.

So we have that going for us, which is nice.

As I delete the 27th text message sent to me tonight from a Laker fan (#27 reads: "domination. pure and simple"), I've officially succumbed to the fifth stage of grief about my beloved Nuggets: Acceptance. Applying the Kubler-Ross model, allow me to eulogize "the season that should've been but wasn't" from one fan's perspective...

After head coach George Karl's Nuggets lost to the San Antonio Spurs 4-1 in the first round of the 2007 playoffs - the team's fourth straight first round loss without mustering so much as two wins, and the third straight such loss under Karl - Karl said that the Nuggets players needed to "respect the regular season" more going into 2007-08. The implication being that if they took the regular season more seriously, they could avoid another first round match up with the eventual Western Conference Championship team.

At the beginning of this season, the Nuggets players predicted a 60-win season and a possible division title in order for the Nuggets to secure something higher than a 7th or 8th playoff seed. Moreover, most NBA pundits were forecasting the Nuggets to finish somewhere between 3rd and 5th in the tough Western Conference, given the relative health, talent and experience of the roster and coach.

So while the Nuggets early season losses to inferior opponents like the Isiah Thomas-coached Knicks, the Clippers, the Pacers and Blazers (at home), coupled with blowout losses to quality opponents like the Celtics, Rockets and Lakers - while routinely giving up 60 points at halftime - should have set off some alarm bells among the fans and the media, Karl pacified us by pointing to the injuries to Chucky Atkins and Nene and feeding us quotes like "I thought we did a good job most of the night."

As the 2007-08 season progressed, however, the Nuggets continued to give up 60 - and in many cases, 70 - points at halftime against both quality and inferior opponents. Throw in some inexplicable losses to piss-poor Eastern Conference teams like the Hawks, Bobcats, Bulls and Bucks (not to mention barely squeaking by the Heat, the NBA's worst team, in overtime) and Karl and the team's laissez-faire approach to each regular season game wasn't flying with the fans or the media anymore. The local newspapers' sports columnists finally turned their attention away from the Broncos, Rockies and Avalanche (albeit briefly) and started questioning Karl and the Nuggets desire to win games.

And of course, out of anger I launched this blog to fire up Karl by suggesting the team fire Karl (sorry for the tongue twister), hoping that a) Karl would give an effort that's consistent with his $3 million salary and, b) that the players would rally around their coach and finally "respect" the regular season.

But all I got for my efforts was the threat of a lawsuit from Karl's "lawyer".

The collective vitriol aimed at Karl and the Nuggets by the fans (at Pepsi Center or via blogs like this one) and the Denver sports media didn't change the fortunes - or the nightly effort - of the team. After the NBA All-Star break, the Nuggets slipped perilously into 8th - and sometimes 9th - place in the Western Conference standings. What was once a team we all expected to compete for the 1st seed in the conference was now fighting just to be eliminated in the first round of the playoffs (again)...and somehow everyone was okay with this!! Karl and the Nuggets media surrogates like Scott Hastings and Chris Marlowe spoke of how amazing 50 wins would be, and how anything can happen when you make the playoffs. So instead of holding the coach and players accountable for dropping out of contention for a title (read: underachieving), we rooted them on with everything we had just to make the playoffs.

And "make the playoffs" they did - as an 8th seed on the second-to-last day of the regular season.

In the playoffs, the Nuggets collection of flaws - no set offense, terrible defensive effort, complete lack of composure, rushed jump shots, refusal to play hard on every possession, over-dribbling, too much standing around, constant whining with the refs (which turns the refs against us when we need them most, see: Game 4!), and so on - were exposed to their fullest effect against the Los Angeles Lakers; a classy, serious, well-coached, professional basketball team that will likely represent the Western Conference in the NBA Finals. To make matters worse, Nuggets fans watched the 8th-seed Atlanta Hawks, a team that won 29 less games than their opponent, pull off two gutty home wins against the far superior Boston Celtics. While the Hawks were channeling the 1993-94 Nuggets, the 2007-08 Nuggets - winners of only seven less games than the Lakers - couldn't get one measly playoff win, and never had a shot in three of the four games in which they lost.

Never forgetting what the expectations were going into the season, I haven't felt this upset about a home team since the Broncos lost to the Jacksonville Jaguars in the 1996 NFL Playoffs (and yes, I was at that game, too).

And now that the season is over, we have to accept that this Nuggets team - as currently constructed - is going absolutely nowhere in the Western Conference.

A coaching change, something I still believe we are in dire need of, isn't going to solve all the Nuggets problems. Nuggets owner Stanley Kroenke - he of a (thankfully) enormous checkbook and passion for basketball to boot, but little instinct into what makes a winning NBA team - should also be considering changes in management and parting with certain members of the Nuggets' roster.

During the off-season, this blog will make such recommendations after reviewing the free agent market and the results of the NBA Draft Lottery (which, as a lifelong Nuggets fan, used to be my favorite night of the year and in a weird way, I kind of miss it). And of course, I still need to complete my breakdown of the Mark Warkentien / Bret Bearup / Rex Chapman Administration. I'm not letting those guys off the hook.

And what about the future of firegeorgekarl.com going into 2008-09? Well, like Coach Karl himself said during tonight's TNT broadcast: during the off-season I'm going to consult with the people I love (i.e. you, my readers) and see if I'm ready for another go-around with this.

But rest assured, this blog will continue in one form or another. That is, of course, if you'll have me back!