Share All sharing options for: Where the #$%& has this team been all season?... 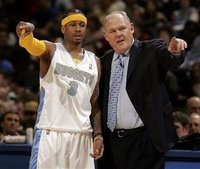 As mentioned in one of my rebuttal comments this week, coaches often get treated like U.S. Presidents - when things are going bad, they probably get too much blame, and when things are going well, they probably don't get enough credit. Last night's win over the Western Conference-leading, 11-wins-in-a-row San Antonio Spurs was a terrific effort, and we should give George Karl credit for this. Not only did the players show up with renewed defensive intensity and the same desire to share the ball that we saw in Wednesday's victory over Phoenix, but Coach Karl was visibly more active on the sidelines for the second game in a row. (It should also be noted that none of my readers sent in a photo alleging that Coach Karl was watching Rocky rather than coaching during a quarter break).

Before we launch http://www.firetheguywholaunchedfiregeorgekarl.com.com, let's not lose sight of a few basic facts. The Nuggets are only 14-17 (4-11 on the road) against +.500 teams. They remain a full game behind Golden State for the 8th and final playoff seed (read: a first round match up with the Lakers or Spurs in the first round) and three games behind division leader Utah. Even Allen Iverson himself said: "With our roster … there’s no way we shouldn’t be in the playoffs." But if the Nuggets can somehow beat the Jazz in Salt Lake City tonight, it might be worth securing that URL!

Oh, and the Nuggets are now 2-0 since George Karl's "lawyer" threatened to sue me into bankruptcy, for those counting.