The Top 5 Denver Nuggets head coaching performances (since I've been old enough to appreciate them)...

Share All sharing options for: The Top 5 Denver Nuggets head coaching performances (since I've been old enough to appreciate them)...

Given that our current playoff chances appear to be circling the drain, I thought I'd serve up some nostalgia from better days in the Nuggets past. Even though I was technically alive for the Denver Nuggets ABA season finale (1975-76), my recollection of watching and attending Nuggets games begins in 1980 - back when Doug Moe taught me all the bad words I still use to this day. Therefore, here are the top 5 Nuggets' head coaching performances since "Empire Strikes Back" hit movie theaters (in reverse order)...

#5 - George Karl (2004-05)
As further proof that this blog is NOT a personal attack against Coach Karl, I give the 5th best Nuggets' coaching performance of my conscious lifetime to King George's 2005 campaign. In 2005, Karl inherited a 17-25 team and subsequently turned in the best record in NBA history by a mid-season coaching replacement by going 32-8 (a remarkable .800 winning percentage) to finish the season 49-33, the Nuggets best record in 17 years. Karl brought renewed energy and enthusiasm to the Nuggets, and gets credit for not being afraid to bench star Carmelo Anthony. Unfortunately, Karl's reward for a furious 17-3 finish down the stretch was a first-round match up with the eventual champion San Antonio Spurs, who beat the Nuggets handily 4-1. 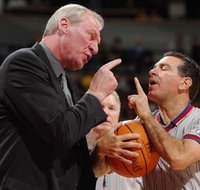 #4 - Dan Issel (1993-94)
Issel's flaws (and Tom Tancredo-style xenophobia against Mexican immigrants) got exposed later, but in 1994 he guided the NBA's youngest team to a playoff berth, and the biggest postseason upset up to that point in NBA history. The 42-win Nuggets defeated the 63-win Seattle Supersonics - coached by non-other than George Karl - in the most exhilarating five-game series in NBA history. What rarely gets mentioned was how remarkable the second round series against the Utah Jazz turned out. The veteran Jazz pounced on the Nuggets 3-0, and yet the Nuggets were able to tie the series up at three games apiece, before forgetting to show up in Game 7 in Salt Lake City. What made this additionally disappointing was that the Nuggets had beaten the eventual champion Houston Rockets 3-2 in their season series, including a double OT thriller in January. In other words, the Nuggets may very well have made it to their first NBA Finals had they been able to beat the Jazz. 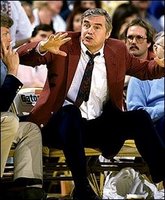 #3 - Doug Moe (1987-88)
In what I argue was the single-greatest season in NBA history, Moe guided the Nuggets to a franchise record 54 games, a Midwest Division title and a second round playoff match up with the Dallas Mavericks. 1987-88 was the last year in which the NBA had only 23 teams, and each team was loaded with talent.
Consider first the NBA All-Star Game starters and key reserves (West: Magic, Lever, Olajuwon, English, Karl Malone starting with Drexler, Worthy and Aguirre off the bench, East: Bird, Nique, Moses Malone, MJ, Isiah starting with Barkley, Ewing and McHale off the bench). Then consider the postseason. In the East, we had Larry Bird vs. Dominique Wilkins' seventh-game shootout in the Boston Garden, and the Detroit Pistons clamping down on Michael Jordan after his Chicago Bulls upset the deep and talented Cleveland Cavaliers in the second round. Meanwhile in the West, the Los Angeles Lakers were taken to seven games for two series in a row - against a stacked Utah Jazz team and then the stacked Mavericks in the conference finals. Then, the NBA Finals culminated with the Lakers' 4-3 victory over the Pistons, with Games 6 and 7 decided by a total of four points. And yes, it was during that season the Nuggets won 54 games. Wow. 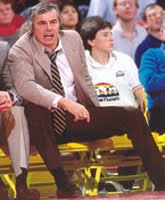 #2 - Doug Moe (1984-85)
Solidifying his title as every Nuggets fan's all-time favorite coach, Moe coached the Nuggets to a 52-win season and the team's second conference finals appearance in franchise history, where the Nuggets lost 4-1 to the eventual NBA Champion Los Angeles Lakers. To give modern day Nuggets fans a sense of how that series wrapped up, the Nuggets lost Game 5 153-109 (ouch!). Are we sure Paul Westhead didn't coach that game? Anyway, the scarring at the hands of the Lakers was so deep, that when the Nuggets faced the Lakers again in the 1987 playoffs, Coach Moe remarked, "We got no shot to beat the Lakers."

#1 - Jeff Bzdelik (2002-03)
I know most of you think I've just lost all credibility by citing Bzdelik's 17-win season as the single-greatest Nuggets' head coaching performance since 1980. But how many times in NBA history can you say a team won 17 more games than it was supposed to? Honestly. Let's consider the facts...
-General Manager Kiki Vandeweghe purposely assembled the least talented team in NBA history, in hopes of drafting Darko Milicic or LeBron James (and from those who know about the Kiki administration, probably in that order) at the end of the season.
-The Nuggets held open tryouts for the public to try to make the team. I don't think a professional basketball team has held an open tryout since the Pittsburgh Pythons!
-The Nuggets' starting backcourt for most of the season - Vincent Yarbrough and Junior Harrington - couldn't crack a 15-man roster on any team the following season. Again, they were our starting guards! You can't name another team in NBA history whose starting backcourt weren't on someone's roster the next year.
-Among the Nuggets 17 wins were victories against the 44-win Suns, the 50-win Trailblazers (twice), the 48-win Pacers (although in fairness they were coached by Isiah Thomas), and the eventual NBA Champion San Antonio Spurs.
-This season was so bad and filled with so many no-name players, that the Nuggets organization doesn't even acknowledge it ever happened on its own website!
-Nikoloz Tskitishvili played over 16 minutes per game and appeared in all but one game. Enough said.
As a side note: In spite of being sandbagged with the most inferior collection of talent ever to step onto an NBA basketball court and being unceremoniously dumped by the Nuggets in favor of George Karl (by way of Michael Cooper), Jeff Bzdelik will go down in history as our most underrated coach. Don't believe me? I refer to his record in just two years at the Air Force Academy and to what he will do with the University of Colorado over the next three years as proof.
Watch out Big 12!