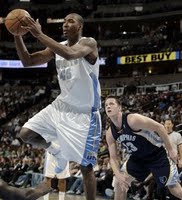 I play basketball every Wednesday night, so I had to record last night's game against the lowly, toothless, colluding-with-the-Lakers Memphis Grizzlies, and watch it about two hours after it was over. I figured the Nuggets won, however, because I didn't have any text messages or missed calls from my friends (or maybe it's because I have no friends left since launching this blog).