Share All sharing options for: Nuggets go 1-0 in the post-"lawyer"gate era... 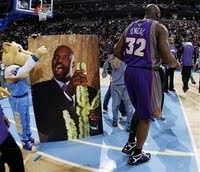 Did any of you observe Coach Karl during last night's victory over the Phoenix "Aren't Rising, but Rather the Opposite of Rising" Suns? He actually (gasp!) got up and (gasp!) paced the sidelines four whole quarters earlier than he normally does. Moreover, he was yelling loud enough that I could hear it on TV. (And yes, I know that pacing and yelling doesn't equal good coaching, but at least it gives the appearance of a better effort.)

But before we get too carried away, Karl's apparent renewed effort may have been an illusion (allegedly) - at least during one break anyway. As my friend Ryan who attended the game and sits in the very first row behind the visitors bench described in an email...

So further proof that George Karl is indifferent or doesn't care. Between the first and second quarter I was listening to Mike D'Antoni coach his team. Rocky had rolled out to start shooting some balls backwards. Mind you this is when the game was still close, and Karl ought to have been caring. Someone pointed Karl out to me, he was sitting there watching Rocky shoot basketballs backwards. One of the assistants was coaching and Karl was watching ROCKY SHOOT BALLS BACKWARDS!!!! I have attached a picture from my phone which I am sure is too small and useless, but proof nonetheless.

I have to admit, Rocky is pretty irresistible. Damn irresistible. I know I've spent entire Nuggets games watching Rocky and nothing but Rocky. Just look at how he's doing in our coaching candidates poll!

For those interested, here is Ryan's photographic "proof" of Karl (again, allegedly) being fixated on Rocky during the quarter break. In fairness to Coach Karl, it looks like J.R. Smith and several other players and staffers sneaked-a-peak, too. But since J.R. just chucks three's, I think he gets a lifetime exemption from participating in the coach's huddle. I can only hope Ryan's camera phone isn't something I count on when I see a UFO or run into Bigfoot.

As a side note, Phoenix's mid-season trade for Shaquille O'Neal is shaping up to be a disaster of epic proportions. It's not quite Chauncey Billups and Ron Mercer for Tariq Abdul-Wahad bad, but it might be close (there's your teaser of what's coming when I post my Referendum on the Dan Issel Administration).