Nuggets desperately try to give game to Clippers. Clippers refuse to accept it...

Share All sharing options for: Nuggets desperately try to give game to Clippers. Clippers refuse to accept it... 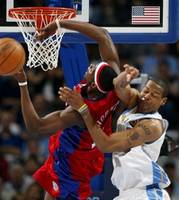 Oh me oh my!!!! Lawler's Law held true and the Nuggets eeked out a home victory against the lowly Los Angeles Clippers. This game felt like an homage to our previous close calls against bad teams like the Timberwolves (twice), Kings (twice), Grizzlies, and the Heat in OT. But at this point, I'll take a win any way I can get one.

A couple positives to take away from this victory...

-The Nuggets are 2-1 since this blog launched.

-The Nuggets are capable of winning a home game against a team missing its best player (Elton Brand), its starting center having his best season (Chris Kaman) and its starting point guard who just got bought out so he could join a contender (Nugget killer Sam Cassell).

-Marcus Camby should be fordbidden from shooting his corner three ever again...I don't care that he made one in the Boston game, but does he really need to shoot at least one in every game now?

-When motivated, Carmelo Anthony can be a terrific offensive rebounder.

-No one should be allowed to shoot with three minutes left not named Allen Iverson. And that means you, Anthony Carter!

Here's a link for those of you who didn't get the Clippers-related inside jokes. I hate leaving anyone out.