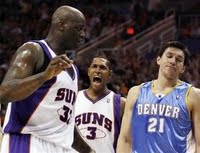 Even though I called the Nuggets losing to the Phoenix Suns tonight when I wrote my end-of-the-season prediction post a few weeks ago, I take absolutely no satisfaction whatsoever in being right. Regardless of what my detractors may think (and that means you, Mike and Sandy), I'm a Nuggets fan first and foremost, and hate seeing the Nuggets lose - hence why I launched this blog in the first place.

What I didn't expect, however, was for the Nuggets to lose in the manner in which they did, blowing a 19-point halftime lead to squander yet another enormously important road game. In fact, when the Nuggets went up 22 in the first half, I thought the only thing I'd be able to criticize about Coach Karl tonight would be his wardrobe selection (the blue pants were especially atrocious). Little did I know. For those counting at home, the Nuggets still haven't won one important road game all season. Not one!

It was especially infuriating watching Coach Karl, who's done a good job lately (and has been credited as such right here), do nothing to stop the Suns' third and fourth quarter onslaught. Karl went back to doing his Phil Jackson impersonation of sitting still and letting the players "figure it out" on the floor which only works if you're...well...Phil Jackson.

There should be a rule in the NBA that when you're up by more than 20 and your opponent cuts your lead in half, call a #$%&@ timeout!! The Suns cut the lead to 11 at the 8:04 mark of the third quarter, after Raja Bell and Steve Nash hit back-to-back three's, and after Nash had been hit in the face by Anthony Carter (and did one of his patented soccer flops) and was clearly motivated to kill the Nuggets. And no timeout was called. Then the Nuggets offense stalled, they started over-fouling the Suns, missed a few defensive rebound opportunities and let the Suns cut the lead to six points before Karl finally called a timeout with 2:58 left in the third quarter. Out of the timeout the Nuggets ran their patented give-the-ball-to-Carmelo-for-isolation-and-let-him-barrel-over-the-defender-while-everyone-else-stands-around play, which as usual didn't work, and the Suns quickly cut the lead to four.

The Nuggets widened their lead a tad going into the fourth quarter, but their inability to defend the three and Amare Stoudamire (and to a lesser extent, Shaquille O'Neal) eventually did them in. In regards to Stoudamire and O'Neal, can someone please explain to me why Marcus Camby was pulled at the 8:59 mark, even though Stoudamire and Shaq were still on the floor, and didn't return until the 3:43 mark when the Nuggets four-point lead had turned into a nine-point deficit?

Furthermore, J.R. Smith - who torched the Suns in limited playing time - didn't get back into the action until 2:52 left in the game (when the Nuggets were down by 11) and nevertheless quickly hit a three-pointer, prompting Suns announcer Gary Bender to say something like, "Gee, maybe that guy [Smith] should've been brought back earlier." Ya think?!

One game shouldn't cost any coach his job. But tonight's debacle in Phoenix was a microcosm of the way the Nuggets have played in big road games all season. Before the Nuggets Tuesday rematch with the Suns (which the Nuggets will win if my prophecy continues to hold true), someone needs to tell Coach Karl that unused timeouts don't carry over to the next game!