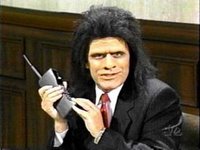 "I don't think it's valuable to pay attention to that."

That was George Karl's quote when asked about my new blog by Chris Tomasson of the Rocky Mountain News last week. Well, apparently he's paying some attention to this, or at least his lawyer is.

Uncovered from the depths of my spam box was an email sent to me early last week from a man purporting to be Coach Karl's attorney. While I have been able to independently confirm that this attorney does, in fact, represent Coach Karl, I have not emailed him back directly to double confirm whether or not this email came from him (even though the email came from his direct email address, who could have faked that?). Please note that I have redacted Mr. Adams' contact info from this screen grab (click the image for a larger view)... 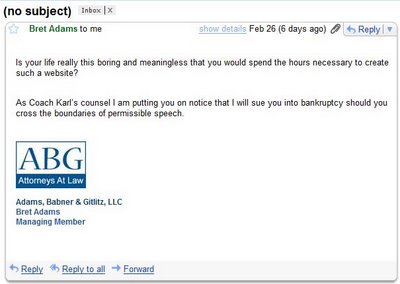 I wish Coach Karl would put his energy into preparing the Nuggets for the tough games ahead rather than into sending his lawyer on the attack against an obscure blogger. What's next? Will Isiah Thomas threaten to sue the New York Daily News when they demand his ouster for ruining another Knicks season? (Although, in fairness to Knicks fans, they're only eight games away from the final playoff spot. I suppose anything is possible!)