Share All sharing options for: Debunking the point guard excuse... 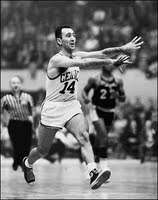 One of the primary excuses that my detractors and Coach Karl apologists throw at me is that the Nuggets can't possibly win because we don't have a real point guard. That somehow until Allen Iverson has a "pure point guard" playing next to him, the Nuggets aren't going anywhere, regardless of who the coach is. When the term "pure point guard" is thrown around, I assume it's referencing pass-first guards like Chris Paul, Jason Kidd, Deron Williams, Steve Nash, Andre Miller, and so on.
Well, I have this to say to my detractors, Coach George Karl and his successor, Coach Rocky (or whomever it is). To paraphrase from former Defense Secretary Donald Rumsfeld:
You go into games with the point guard you have, not the point guard you might want or wish to have at a later time.
Here's the proof. Of the last 21 NBA Champions, only nine had pure point guards who started, garnered significant minutes and were key to their teams' victories (the Lakers twice with Magic Johnson, Pistons twice with all-time worst person in the NBA Isiah Thomas, Spurs once with former Nugget Avery Johnson and three times with Tony Parker, and the Heat once with - gulp - the combo of Jason Williams/Gary Payton). Three other teams used a hybrid guard system, where neither guard was a "pure point guard" (the Rockets twice with Kenny Smith and free weight thrower Vernon Maxwell, and the Pistons once with former Nugget Chauncey Billups and Rip Hamilton). The other championship teams - Michael Jordan (whom it should be noted was not a former Nugget) and Scottie Pippen's Bulls, and Shaquille O'Neal and Kobe Bryant's Lakers - didn't utilize a "pure point guard" whatsoever.

Even this season a few Western Conference Playoff teams are faring much better than the Nuggets by letting their two-guards with point guard body types play as shoot-first point guards. I'm specifically referring to the Golden State Warriors usage of Baron Davis, and the Houston Rockets usage of Rafer Alston. And no, BD is not a "pure point guard" compared to the names initially mentioned above. Not even close.
With Davis as their starting point guard for virtually the entire season, the Warriors are 2.5 games ahead of the Nuggets and 4.5 games out of first place in the West. However, the Warriors are 2-7 without small forward/shooting guard/fan puncher Stephen Jackson. Even if they went 5-4 in those games, they'd be fighting for the top spot in the West. It should be noted that the Warriors are 11-5 in games in which Davis dishes out at least 10 assists (and two of those losses were during Jackson's absence).
The Rockets, with Alston starting at point guard, have won 19 straight and are 6 games better than the Nuggets, in spite of suffering injuries far more devastating than anything Denver has dealt with. Remarkably, during the 19 game win streak, Alston has dished out at least 10 assists just three times (five times all year), and he hasn't had more than four assists in any of their last three wins.
Referring back to my Rumsfeld-esque quote above, Coach Karl defenders should stop using the "no pure point guard" excuse for being in the Western Conference's ninth spot. Instead, we should all demand that Karl utilize A.I. as the team's full-time point guard (and start J.R. Smith beside him at two-guard). And why not? After all, the Nuggets are only 12-1 in games in which A.I. has 10 or more assists.
(With thanks to reader Chillz for bringing up the A.I. 10 assists = wins issue!)