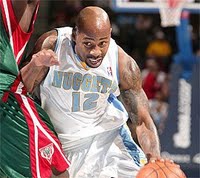 Chucky Atkins brings his career 41.5 FG%, 3.6 assists per game, and 2.25 assists-per-turnover ratio back to the Nuggets tonight. What's remarkable is that Coach Karl and his defenders have actually used Chucky's absence as one of the main excuses for under performing this season (the other being Nene's absence, a legitimate blow to the team).

Since I split my time between Los Angeles and Denver, I probably watched about two-thirds of Chucky's games during his one-year tenure with the Lakers in 2004-05. As my die-hard Laker fan friends and readers will be back me up on, we never saw Chucky make a shot. Not once. I know he technically made some shots according to the box scores, but we just never saw him do it. Kind of like Yakhouba Diawara never makes a shot, DeMarr Johnson never made a shot, and so on.

I don't know if the 11-victories-in-a-row San Antonio Spurs have had enough time to prepare for Chucky's return to the Nuggets lineup, but my guess is they'll find a way to shut down this "outside threat."