Betting on an ABA reunion game...

Share All sharing options for: Betting on an ABA reunion game... 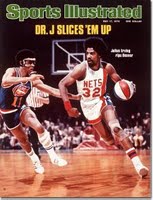 I've noticed the tone of my recent posts - and the comments that follow - have been overwhelmingly negative as of late. This is certainly justifiable as a once hopeful NBA season for Nuggets fans has turned into debacle reminiscent of the 2001-02 Milwaukee Bucks - another supremely talented team that had to deal with a few nagging injuries to key players, featured a combustible, overpaid power forward, had questionable chemistry issues and subsequently missed the playoffs by one game. Oh, and that team was coached by none other than George Karl.

Depending on how the Nuggets season ultimately pans out, I'll write more about the comparison between this Nuggets team and that Bucks team. But given that this is "Good Friday," I thought I'd write something positive for once - and thus will talk about me gambling (infrequently, I swear!) on the Nuggets.

I'm off to Las Vegas today to throw away my nominal cartooning income on NCAA tournament games. But since the Nuggets are playing at New Jersey tonight and are only 4.5 point favorites, I'll be wagering (just a little) on the Nuggets to win and cover the spread.

I know the third rail of sports fandom is to never bet against your own team, but I don't know the code as applied to betting on your own team. I think that's ok, right? Moreover, I've actually done quite well (relatively speaking, I don't gamble much) on the Nuggets this season. The last time I was in Vegas and had an opportunity to bet on the Nuggets was in November, when the Nuggets had back-to-back games at Washington and Indiana.

Regarding the Washington game, the Nuggets had just come off supremely embarrassing back-to-back losses at New York (the most shameful and inexcusable loss of the season) and at Boston (who beat Denver by 26), so I figured the Washington game, whatever the spread was at the time, was a lock for Denver. The outcome? The Nuggets creamed the Wizards by 26, and rested their starters for the entire fourth quarter.

Given the easy win and the rest against the Wizards, I bet on the Nuggets to beat the Pacers in Indiana the following night. For those who don't remember that game, the Pacers were up 74-56 at halftime! But Coach Karl actually coached for once. By all accounts, Karl gave the team an expletive-filled tirade at halftime and the Nuggets came back ferociously to win the game, and cover the spread. Coach Karl and the Nuggets showed a lot of heart in that game, and have left us befuddled as to why this hasn't happened more often ever since.

So back to tonight's game/bet. With the Nuggets being totally humiliated by the Pistons and Sixers this week, I'm thinking Denver will take care of the Nets and cover the spread while doing so. And if the Nuggets lose their third straight game, feel free to blame me for jinxing the team!