You know your coach sucks when...

Share All sharing options for: You know your coach sucks when... 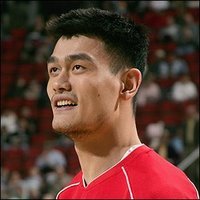 ...you need a competing team's superstar to go down with a season-ending injury in order to get your team into the playoffs. As you've all heard by now, the Houston Rockets Yao Ming is done for the season with (another) major injury. That's three major injuries in as many seasons (I know because I've had Yao on my fantasy team two out of the last three seasons).

While I don't normally feel badly about Nuggets' opponents struggles, watching Yao almost break into tears at his press conference today genuinely touched me. This guy is a hard worker and a class act, and you have to feel for him and the Rockets organization. I've been a fan of Yao's ever since he spoke out against eating shark's fin soup in China.

So much for Tracy McGrady getting to the second round of the playoffs for the first time.