Share All sharing options for: EXHIBIT 2: LOSSES AGAINST BAD TEAMS 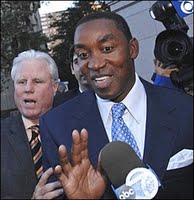 (How do you get out-coached by this guy?)

What do the following teams have in common?

All seven of these teams are well below .500, and yet they have beaten the Denver Nuggets this season. While certainly every NBA team has off nights, the Nuggets haven't exactly made up for these losses against better opponents. The Nuggets are also 6-11 against the top 8 Western Conference teams.

Basically, had the Nuggets won just 3 out of 7 games against the sub-.500 opponents noted above, and picked up just ONE more game against the top 8 Western teams, we'd be looking at a 37 win team right now - right at the top of the Western Conference. This is why you don't blow 23-point leads to the Milwaukee Bucks!