Share All sharing options for: How to waste a 43-point game... 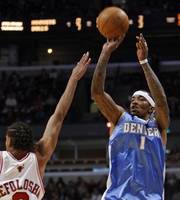 For the second time this season, the Nuggets squandered an over-40 point performance from one of its players in tonight's loss to the Chicago Bulls. This time, the wasted effort came from shooting guard J.R. Smith, who lit up the trade-depleted Bulls for 43 points.

One of my many issues with Coach Karl's inept coaching this season has been the mis- and inconsistent use of J.R. Smith - a mercurial yet extremely talented gunslinger. Why the Nuggets don't give Smith more minutes and play a Golden State-style offense befuddles me greatly. The bottom line is, we should be running and shooting our opponents off the floor nightly.

On this particular night, Smith played his heart out, making seven three-pointers in the fourth quarter alone. The previous wasted effort was when Allen Iverson scored 51 points (49 through three quarters) in a home loss to the Lakers.