This might be the only way to get the Nuggets into the playoffs...

Share All sharing options for: This might be the only way to get the Nuggets into the playoffs... 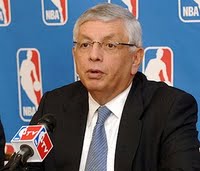 There may only be one way to overcome Coach Karl's deplorable coaching efforts in 2007-08 and still get the Nuggets into the playoffs: RE-DO THE NBA PLAYOFF SEEDING!!

Nuggets-bias aside, this has been long overdue. You may have heard a proposal like this before, but I believe I've come up with a fair way to re-seed the NBA Playoffs that would accommodate everyone's needs - the league, the networks and the fans. It simply no longer makes sense that teams 10 games over .500 could miss the postseason, while a few teams 10 games under .500 potentially won't.

I propose the following: Seed 16 playoff teams pan-conference, but give the three division winners, plus one in-conference wild card, the top four seeds within their respective conference.
Under my proposed system, if the playoffs started today (2/20), here is out it would shake out:

This would then leave the following 8 teams, pan-conference, in order per record:

A couple notes:
-After the first round, there is no re-seeding. The winner of the 1 vs. 8 match up plays the winner of the 4 vs. 5 match up, and so on.
-To accommodate travel concerns, I would make all series 2-3-2 series.
-This system also disincentives teams to tank games in order to get favorable playoff match ups. By having a 16-seed system, many teams won't know who their first-round opponent will be until the last few games of the regular season.
-The reason for the Wild Card (as opposed to just giving the top three seeds auto bids), is that we need to keep at least four teams within their respective geographical bracket. This benefits the networks as they can broadcast playoff games consistently across four time zones, rather than risk losing 85% of the TV market should three out of the final four teams all be from one conference.