Share All sharing options for: George Karl responds to FireGeorgeKarl.com!... 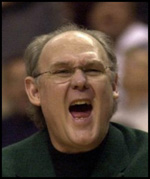 The Rocky Mountain News' Chris Tomasson wrote about my blog in his column today, and asked George Karl if he's aware of the site, to which the coach replied...

"The longer you're with a team, the more people like you and the more people dislike you," Karl said. "I don't think it's valuable to pay attention to that, to de-energize me and waste my energy right now."

First off, I want to sincerely thank Chris for taking the time to interview me and get my side of the story, and I applaud him for having the guts to bring up this site to the coach directly. That's journalism at its finest!

Secondly, DE-ENERGIZE?!! I don't think this blog could de-energize our coach anymore! After all, he regularly sits through three-and-a-half quarters of every game, doing a poor Phil Jackson impersonation (Phil also sits through three-and-a-half quarters, the big difference is that his Lakers run a complicated offensive scheme throughout the game, whereas the Nuggets run a, well, errr, uh...we're still not sure what they run).

The purpose of this blog is to energize the coach, the players and the entire organization. We as Nuggets fans have suffered for 14 years without winning a playoff series, 23 years since last playing in a Conference Finals and 32 years without appearing in an NBA Finals. So before we fuss over a blog de-energizing anybody, let us not forget the core facts...

-The Nuggets have two of the top-four scorers in the NBA (Allen Iverson and Carmelo Anthony), who are also having one of their best all-around seasons statistically. And Marcus Camby is currently the NBA's second leading rebounder and leading shot blocker, too.

-Exempting Nene (who we should be used to playing without by now anyway), the Nuggets core players have been remarkably healthy - including Camby, who has missed a career-best three games. And losing Chucky Atkins for most of the season shouldn't be a burden, but a blessing in disguise.

-The Nuggets haven't had this much talent (or this high of a payroll) in team history, and yet they are currently 9th in conference seeding, with even a 7th or 8th seed all-but-guaranteeing a first round exit to the Lakers or Spurs.

-Karl has presided over similar implosions with talented teams in the past. As my friend Zach from Denver reminds me in regards to my never-ending dating problems: "The one constant in all these relationships is YOU!"